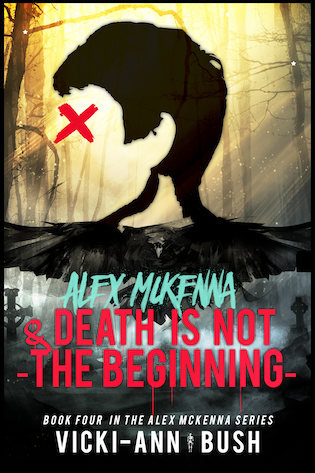 Synopsis:
In the fourth and final installment for the series, Alex faces his most difficult case yet—the school bully.

For two years Kyle tried to make Alex’s life even more complicated than it already is. Choosing to single him out for his psychic abilities and other life events, the angry teen took every chance he could to challenge Alex’s well-being.

Despite the constant insults, when the bully is murdered and comes to him for help, Alex sets aside the past to help a soul in need. Searching for the killer, Alex uncovers a truth that answers the question why he was the victim of Kyle negative attention, and the answers that will set them both free.

Alex glanced up to the hovering apparition and raised his chin slightly left toward the door. He hoped the spirit would follow, but instead, it quickly vanished, so he took the cue and let it go. Clasping Margaret’s hand, he ushered them from the store.

Outside, the fragrance of freshly cut grass and blossoming tulips tickled his nostrils. A perfect Spring day. The young couple had strolled the fifteen-minute walk into the small village at the center of Floral Park, taking advantage of the warmer climate.

“It is. I love Spring. Hey, what happened in there?” Margaret asked.

“I thought you spotted something.”

“I didn’t know them, but it was definitely an older man. I’d say somewhere around my gram’s age.” Alex glanced over his shoulder back at the store.

“How come?” Alex raised a brow.

“He’s in a drug store for eternity? Why? What keeps him there? Why doesn’t he cross over?”

“Well, it was bound to rub off some time.” She lay her head on his shoulder.

“I know.” Margaret gave him a quick peck on the cheek.

Rounding the corner at the end of the block stood a structure Alex struggled with for most of his seventeen years. Coming from a lineage of witches whose roots were planted in Italy, the paradoxical blend of spells and Catholicism baffled him. He chose to believe in spirituality, embracing his ancestors and calling on them in times of need.

Alex let Margaret’s hand slip through his fingers. Across the street, directly in front of the church, was a small park with a handful of benches. His gaze focused on the ornate stained glass adorning the round window above the sturdy oak doors. What the hell? Without care, he stepped into the road and in front of an oncoming car. Luckily, Margaret’s scream freed him from his trance in time for him to jump out of the way. A loud screech from the tires of the irate driver didn’t completely mask the language he yelled from the window.

Margaret rushed to his side and pulled Alex to a bench facing the building that had captivated his attention a few moments ago.

“What the hell?” Margaret slapped his arm.

“Sorry. I don’t know what came over me.” Alex glared at the church. “That’s not true.”

“Okay, spill.” Margaret scooted back and crossed her legs.

“Cr*p. It’s over there.” Margaret pointed to the asphalt.

“I’ll get it.” Alex motioned to stand.

Normally he’d argue the issue, but he didn’t trust himself either. The range of emotions creeping along his veins and occupying dread in his gut burned a volcano of doubt in his psyche.

Margaret halted at the sidewalk’s edge and turned her head from side to side before venturing into the middle of the road. She snatched up the bag and scurried back to the bench.

She stretched out her arm to hand the bag to Alex, “Thanks.”

“I’m just that kind of girlfriend. Risking life and limb for the guy I love.”

“Now, where were we? Oh, I remember, you were gonna tell me why you froze in the middle of the goddamn street.” Margaret knitted her brows.

“Once again—sorry. When I saw the church, I had a vision. The building was destroyed like a bomb or something had incinerated it. The darkness crept along the walls. It was like…a living thing.” Alex shuddered.

“Yup, just another day in the world of you.”

Originally from New York, Vicki-Ann currently resides in Nevada. Writing Young Adult paranormal, she finds inspiration from events that have been in her life for as long as she can remember. Inheriting her sensitivity to the supernatural from her family, they continue to be an endless source of vision.