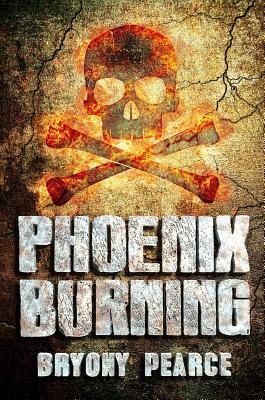 Though the Phoenix and the Banshee have divided the precious solar panels they teamed up to salvage at the end of Phoenix Rising, both ships are missing the crucial component that will allow them to actually put the panels to use. And so Toby and Ayla warily team up to infiltrate a sect of sun worshippers to steal the equipment.

They think entering trials to be chosen as the Sun and Moon for the sect’s upcoming sun festival will be an easy feat, but learn all too soon the true cost of failure. There are other young couples equally desperate to win who will do whatever is necessary to eliminate the competition. Enduring days without sleep, hours sitting in the blistering sun, and a deadly maze, Toby and Ayla need to work together to win.

Still, past betrayals may be forgiven, but never forgotten. And their alliance could go up in flames at any minute.

Where the first novel, Phoenix Rising, was more traditional “pirates on the high seas,” Phoenix Burning is more reminiscent of The Hunger Games.

Phoenix Burning has a slightly faster pace than Phoenix Rising. And each trail Toby and Ayla had to face became harder and more life threatening, making it difficult for me to put the book down. There was one complication thrown in during the last 75 pages that I didn’t feel necessary, but the ending made up for this.

I really enjoyed reading this duology and highly recommend it to anyone who enjoys books about pirates, especially futuristic ones.

#FantasyIndiesFebruary
#FantasyIndiesFebruary
Today, I am opening a path to new beginnings.
Finished my character sketch of Seshat from my WIP, Lost Souls. I love how she came out. Probably my best sketch yet.
Getting closer to finishing my character sketch of Seshat!
Trying something random. I'm giving away 50 e-copies of my short story, Dark Goddess, through BookFunnel.
%d bloggers like this: