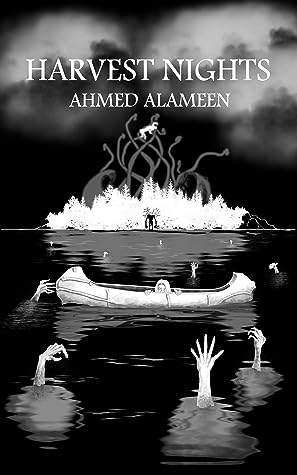 Harvest Nights is a story told through a young boy named Chua (Snake), who narrates the story of how the days were gone and replaced by nights when a strange shooting star appeared in the sky in 1811 Colonial America (Great Comet of 1811). During those dreadful nights, Chua, and later three other people, will have to survive the other worldly creatures that will stop at nothing to eat. A Lovecraftian horror story featuring famous historical figures and creatures inspired by Native American myths.

This is a horror story that will haunt you, especially if reading right before bed (as I traditionally do).

In my opinion, most horror I see nowadays focus more on the gore than the suspense. Harvest Nights still has plenty of gore, but it also had the right amount of suspense. Despite all the deadly creatures feasting on human flesh, the two horrors that stuck with me most were the dead deer room (probably because of a personal experience I had), and of course, the Skinwalker.

I will admit, I do not know a lot about mythology from the American Nations, except for Mayan and some Aztec. Even the Skinwalkers, which I have only heard about from television shows such as The Dresden Files and Sanctuary, I never linked to a specific mythology. But reading Harvests Nights has inspired me to do more research into the different creatures mentioned as well as other mythology.

Overall, if you are a fan of Lovecraftian horror, I recommend you give this novella a try.