This is my stop during the book blitz for Yearning to Live by Shirley Anne Edwards. In Yearning to Live a self-proclaimed ordinarily average girl meets the one larger than life person who will make her yearn for so much more.

This book blitz is organized by Lola’s Blog Tours. The book blitz runs from 24 till 30 July. See the tour schedule here. 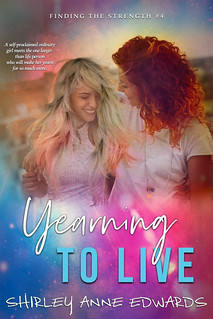 Blurb:
Natalie Benton has nursed enough heartbreak in her twenty-one years. But she doesn’t like to complain even though her parents’ marriage might be falling apart, and she’s still mourning her brother, who committed suicide five years ago. On top of that, she was recently ghosted by her lover, an emotionally detached tattoo artist who ran off to California. She’s ready to graduated college in a few months but she’s not sure what her next steps will be. For now, she’ll take each day as it comes, which has become her mantra as an ordinary, average girl in Albee, Pennsylvania where nothing exciting ever happens.

But fate has other plans for Natalie, when a very not ordinary average girl enters her life. It’s the larger-than-life Gem Grove, one of the most popular singers of the past decade. Gem’s been hiding out in Albee while she also tries her best to take each day as it comes, but her addiction to bigger fame and fortune could lead to her downfall. The public may think she’s entitled and spoiled but she’s ready to prove them all wrong. She’s more than just a singer who performs on demand. She wants to create art with her songs and gain the respect she has always wanted.

Natalie and Gem shouldn’t fit together but they do. The ordinary average girl and the larger-than-life diva might be destined for more, but only if they can achieve it together.

Earlier books in the series:

“When you said you wanted to take me to your house, I wasn’t expecting on the lake.” We were twenty minutes outside Albee and surrounded by a huge lake where Dad fished almost every weekend. Most of the houses there were newer and expensive, which was definitely the case with Gem’s. She even had a hot tub in the back, facing the lake. Why would anyone need a hot tub when the lake was in their backyard?

She dropped her bag on the marble island in her kitchen that would make Mom jealous. “I don’t own the house. I’m renting for now because I was sick of staying in hotels. Also, this end of the lake has good security patrols, so I don’t have to worry too much about the press stalking me or trying to snap a picture of me, especially if I go skinny-dipping.”

I turned my head so fast, I might have strained my neck. “You swim naked in the lake in the winter?”

She lifted her hands to her mouth and laughed. “Oh my god, the look on your face is too much! I’m joking. I moved in here at the end of October, so I haven’t been swimming yet.”

“Oh.” I looked out the window again, wincing at how warm my face felt.

She opened the refrigerator. “Want something to drink? I have juice, seltzer…water?”

“No soda?” I scanned the large and airy room. The ceiling was so high!

“I don’t drink soda.” She made a face and took out a bottle of water. “I don’t have any booze, either—”

“Water is fine for me.” I sat on a barstool while she poured our drinks. “The only time I drink alcohol is Friday night at this bar called Bask’s for happy hour. And it’s usually beer.”

I accepted the glass and clinked it to hers. “Cheers.”

She smiled. “To new friends.”

I lowered mine. “Is that what we are now?”

She drank almost half of hers while she stared at me, making my face warm again. “I’d like to be.”

Shirley Anne Edwards is a Northeast girl who first found her love for books when she read Nancy Drew’s The Secret of the Old Clock Tower at thirteen. Shirley found her love for writing at a very young age, and since then has let her imagination run wild by creating quirky characters and vast worlds in her head. Shirley lives in New Jersey and works in the entertainment industry in New York City.

Trying to get into a little Christmas magic.
Litten looking sad under the Christmas tree. Just started putting up Christmas items. Not sure why he looks sad about it.
Installation finished yesterday, so life can go back to semi-normal. Homework, a few chapters of my secret #writing project, and grocery shopping are all on my list for today. Hey, #writers have to eat, right?
So, the installer never showed yesterday. Day wasted. They are supposed to be here this morning. Crossing my fingers. I also have class on top of it. Yeah, not expecting to get anything done (again).
Last day of house-related installs/fixes. Also, last week of classes before final exams. I am so dead on my feet. Can't wait for a break where I can focus on #writing.
Happy #Caturday! I asked Litten if he would model next to one of my books. I guess he didn't expect it to be the one with a vampire black cat. 🧛‍♀️🙀😆
Loading Comments...
%d bloggers like this: