This is my post during the blog tour for The Silver Sail by Bridgette Dutta Portman. In The Silver Sail an anxious 16-year-old trapped in a world of her own creation must find a legendary starship before the double suns explode.

This blog tour is organized by Lola’s Blog Tours and the tour runs from 23 May till 5 June. You can see the tour schedule here. 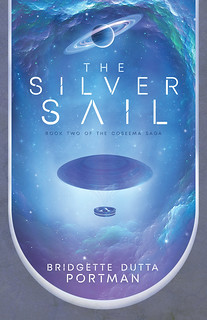 Olive Joshi never meant to fall through a portal into her own abandoned novel, much less kill her protagonist and resurrect her as a villain. Now she’s on the run in a universe quickly spiraling out of her control.

After narrowly escaping Coseema with her life, Olive and her friends head for a distant planet in search of the legendary starship the Wave-Rider, which may be the only hope for the doomed people of Lyria. But the voyage there is littered with obstacles—the tyrannical ruler of a dying colony, a mysterious spacefarer, the ever-present threat of Coseema, and Olive’s own obsessive fears. Back on Lyria, Olive’s allies face obstacles of their own as they vie with the cruel emperor Burnash, while Burnash himself chafes under Coseema’s control. Olive, armed with her omniscient journal, finds comfort in reading along with her friends’ adventures. But when time runs out, she must embark on a risky collision course with her former heroine, one that may force her to give up what she treasures most.

The Silver Sail, Book Two of the Coseema Saga, is a must-read for fans of portal fantasy, space opera, coming-of-age adventures, and novels about mental health, self-esteem, friendship, and courage in the face of uncertainty.

First book in the series: 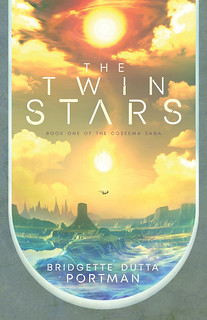 The Twin Stars (The Coseema Saga #1) by Bridgette Dutta Portman
“A troubled teen. A magic journal. A portal to another world.”You can buy The Twin Stars here on Amazon 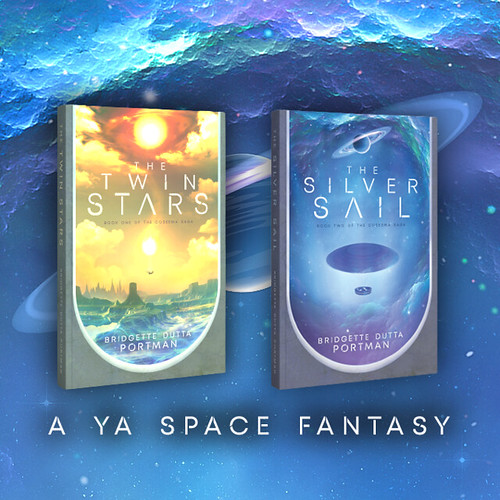 If you could take a portal to any fictional world, which would it be and why?

What a fascinating question. There have been so many fictional worlds I’ve known and loved, and it’s hard to choose. It would definitely be a fantasy world, as I’d like there to be an element of magic. I also love space, and exploring strange planets and encountering alien creatures would be thrilling. Okay, space…magic…I think I’ve got it.

I’m going to a galaxy far, far away.

Star Wars captured my imagination when I was 13 and never let me go. It offered an escape from the everyday world, and I’d like to think it taught me something about storytelling, about plot and pacing, about stakes, about how to keep character development and relationships front and center. It was definitely one of the influences on The Twin Stars, and perhaps even more so on The Silver Sail.

As far as specific locales, I’d like to visit Tatooine and watch the double sunset. Maybe while sipping a refreshing glass of blue bantha milk.

Bridgette Dutta Portman is an author, playwright, and teaching artist. Dozens of her plays have been produced across the United States and overseas. She holds an MFA in creative writing from Spalding University, as well as a PhD in political science from the University of California, Irvine. She is past president of the Playwrights’ Center of San Francisco and is currently a member of Same Boat Theater Collective, the Pear Playwrights’ Guild, and the Dramatists’ Guild. She recently joined the board of the Pear Theatre in Mountain View, CA. The Twin Stars is her debut novel, and the first of a planned trilogy. She lives in the San Francisco Bay Area with her husband Deepanshu and their two young children.

Giveaway
There is a tour wide giveaway for the blog tour of The Silver Sail. One winner wins a $25 Amazon or B&N gift card. Open International.For a chance to win, enter the rafflecopter below: