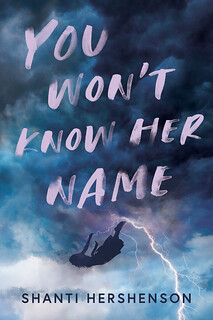 Synopsis:
“I thought they were my best friend…”

There lives a little girl whom you will never know the name of, and for her, a terrible storm is coming. She is going to a new, public middle school knowing no one but her sister, and the horrors are absolutely endless.

But she doesn’t expect what is to come.

In her first few months of school, terrible and unspeakable things begin to happen, that go beyond what is considered “normal”. Finding the courage to get away from the wrong people is a difficult thing, but when a horrific incident occurs, she finds herself running from who she once thought to be friends.

Now lost and alone, The Girl turns to one thing to help her get through her darkest moments. Writing poetry is the one way she can express her anger, and when her school announces that they will be hosting an open-mic night, she knows she has to enter. But entering means that she will have to face her demons, and it could be her worst nightmare…

From a teenaged author, You Won’t Know Her Name shines a light on a heartbreaking reality that often goes unspoken about – the issue that is bullying in middle school. From hateful comments to real, shocking violence, this book shares what cannot be ignored.

A COMING STORM
There lives a little girl
Whom you will never learn the name of
But she exists; she’s real in these pages
Her features, you may never learn
But you can know one thing
She is a survivor
Or, she thinks she is
She thinks she’s faced the worst storm
But that’s a lie, and things are only calm
Because a deadly hurricane is coming

THREE DAYS LATE
The Girl is starting middle school three days late
Once because of a car accident
Then, because of a tragedy
And lastly, because of what is supposed to be good news
She’s moving to a new school

LOST IN THE DARK
The school floors are grey
They feel dark and dreary
And for The Girl, everything feels like a nightmare
She is lost and cannot find the way

HEADING TO THE CLASSROOM
The Girl is given a fresh slip of paper
With bold lettering telling her where to go
It’s like a map, and it gives her a classroom number
She needs to go there soon, or else she’ll be horribly late
On her already chaotic first day

STAIRS AND STARES
The Girl hurries up the stairs
And makes it to a large door
Where she can hear voices inside
Preparing to start the day
And with her backpack slung over her shoulder
She steps inside, and is met with the stares
Lots and lots of stares

TOO MANY CLASSMATES
Up until this point, The Girl had attended private school
But now she’s struggling to fit in
In a new city
With too many classmates
That she does not know
She’ll come to learn their names, in time
But for now, they are strangers, and she is alone

INTRODUCTION
She is asked to introduce herself to her classmates
To make new friends in the process
“Hey, my name is-”
It’s important for you to not know her name
“-and I like a few things.”
She explains how she likes to read and write
And the shows she watches
The movies she likes
The games she plays
She’s a normal, innocent child

HER FAVORITE SUBJECT
The Girl doesn’t really like school in general
Except for one subject – writing
It’s a break from the storm that brews
A break from the struggles that loom
Like being a teenager, which she isn’t yet
She’s eleven-years-old, but won’t be for much longer

BREAK, FINALLY
At eleven o’clock, it finally comes time for a break
It isn’t lunch, and it isn’t nearly long enough
But this becomes her one time to make friends
Her sister knows people, having not been late
And those classmates are her only possibilities
For a friendly day

THE TABLE AND KIDS IN IT
The table is crowded as children coo
And The Girl comes to sit beside her sister
Who doesn’t know these kids any better than she does
But they will come to learn their names
Their personalities
Whether they be good, or bad

THE PERSON (PART ONE)
The Girl meets one person who stands out
Though she just can’t figure out
If it’s in a good way
Or bad
“Hi, I’m-”
Actually, you shouldn’t know their name either
Apologies, really, but names are not important here

THE PERSON (PART TWO)
Content Warning: Verbal Abuse
The Girl sits at the table, beside The Person
She is asked questions, mostly about her interests
“What shows do you like?”
The Girl and The Person have a few shared interests; things that could bring them close
“But your favorite show?”
When The Girl answers, she is given a different response
“Get the f*** out of here. Now.”
The Girl doesn’t know what to think
Her mind is a haze and everything is confusing
The Girl stays and The Person doesn’t seem to mind
And things seem better, as though friendship is a possibility
The Girl might be making a mistake

AT THE END OF THE DAY
The Girl makes it to the end of the day
After hours of work, and getting to know
More and more people
Whom she doesn’t really care about
She thinks she may have made a friend
Though things still feel uncertain
If a good first day means making it to the end
Then she had an awesome day

Shanti Hershenson’s first two novellas were published when she was in the sixth grade, although her writing journey started long before then. Ever since she could hold a pencil, marker, or crayon, she was creating stories. They started from pictures, mere scribbles, and eventually, turned into captivating tales.