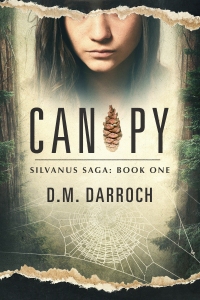 Tag Line: See the girl in the trees. Catch her if you can.

Several centuries ago, a group of ecologists escaped the breakdown of a society ravaged by climate change by vanishing into giant, genetically engineered forests in the North American west. Dwelling among vast canopies that hover several thousand feet above the earth, their descendants fear the cannibals roaming far beneath them and cling to the teachings of their sacred text, The Book of Silvanus. Sixteen year-old Ostrya considers it a burden to train as the canopy’s next doctor. But her life’s work has been preordained—and she’s desperate to reclaim her mother’s love. When a cataclysmic storm wracks the canopy, Ostrya begins to face her doubts about the teachings of the book and the laws of the canopy. If she is to survive, she will have to decide if her destiny is in the treetops or on the forest floor…

Q: What genre do you most like to read?

A: I tend to cycle through genres. If I enjoy an author’s work, I’ll read everything in their back list I can get my hands on, regardless of genre. And when I’m really feeling a genre, I’ll go on a complete binge. Lately I’ve been bingeing dystopian YA novels, hmmm, wonder why that is? I love speculative fiction, science fiction that stays on this planet, near future stories, Black Mirror-type fiction. I read a ton of mysteries, cozy and not-so-cozy. Crime thrillers and lots of literary fiction. I adore clever middle-grade stories. Anything that keeps me guessing, makes me think or makes me laugh, and if there is a twist at the end, that’s the best!

Q: What are some of your non-writing hobbies?

A: Gardening! My hands and knees in the dirt, coaxing something to grow. Fruits, flowers, vegetables, trees, vines, shrubs—I’m not picky. Fiber! I enjoy weaving rugs on my floor loom and fussy things on my table loom when I’m not knitting something or other. Hiking! The fresh air, the trees, the mountains, waterfalls. I’m happiest when I’m outdoors. Baking! Crusty, warm sourdough loaves are my favorite things to bake.

Q: Can you tell us about your book?

A: My series, Silvanus Saga, is about life on Earth hundreds of years from today. It tells an imagined future that results from the decisions we make today—specifically those that affect the climate. Canopy, the first book in the series, tells one piece of that story. One group of humans has taken to the trees, gigantic genetically-modified trees that can sustain gardens and dwellings—an entire society. Ostrya, a teen coming of age in the treetops, is struggling to reconcile her individual hopes and dreams with the expectations of her community. Our circumstances have changed, but hundreds of years from now mothers and daughters still love each other while they’re fighting, people still fall in love, and teens still find their own way in life.

Q: Does your book’s title have special meaning?

Q: Where did you get the initial idea for this book?

A: Several years ago, I was researching a mystery novel I had planned to write. And no, I haven’t written it yet, but I still plan to. As part of that research, I picked up a nonfiction book by Robert Preston called The Wild Trees, about a group of tree scientists and their work in the forest canopies of California, Oregon, and Australia. Unable to put the book down, I wondered what it would be like to build a world in the treetops, how big the trees would have to be to sustain humans over the long term, what would have caused humans to leave the ground, and on and on. My mind was off and running—so many what-ifs to explore.

Q: What was the most challenging aspect of writing this book?

A: The climate science. This isn’t a cli-fi novel, not a story written in the middle of a climate change event, but the science needed to make sense. Temperature, clothing, which plants would grow and which wouldn’t. There were a lot of unknowns because no human has lived in a world like the one I envisioned in Canopy, but the science had to be plausible and consistent.

Q: What was your favorite scene to write?

A: I love writing adventure scenes, so probably the first time Ostrya climbs to the very top of the canopy, tries to find a crossing over the abyss, and slips! I also enjoyed writing the flirty scenes between Ostrya and her crush—a different kind of adventure.

Q: Who is your favorite character in this book?

A: Mangrove, though Ostrya is a close second.

Q: Give us a sneak peek of what you’re writing next!

A: Right now, I’m working on the second book in the series, tentatively titled Boneyard.

D.M. Darroch is the author of the Inventor-in-Training series as well as other speculative fiction stories. Her books weave together nature and science with adventure and often a touch of humor. Danelle lives in Washington State, USA and enjoys long walks in the forest. Her website is: https://www.dmdarroch.com.