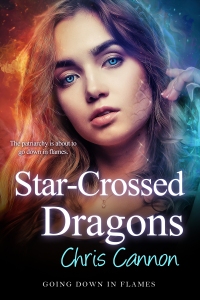 Ice-princess, Sara Sinclair, is the most un-Blue Blue Dragon of her Clan. And now her parents signed a marriage contract to an absolute asshat. Sara has no interest in being one half of a snobby Blue power couple. In fact, all she can dream about is biting her obnoxious fiancé’s head off and burying him in the garden. Since that can’t happen, her future seems like a lost cause, until she meets Ian, a fire-breathing Red Dragon—who is everything her fiancé is not.

Now Sara’s jumped from the frying pan into the fire because dating outside of your Clan is against Directorate law. Ian could be thrown in jail or executed without a trial. But now that she knows what love feels like, she can’t imagine being with anyone else.

Talk about a rock and a hard place…

Chris Cannon is the award-winning author of the Going Down In Flames series, the Boyfriend Chronicles, and the Dating Dilemma series. She lives in Southern Illinois with her husband and several furry beasts.

She believes coffee is the Elixir of Life. Most evenings after work, you can find her sucking down caffeine and writing fire-breathing paranormal adventures or romantic comedies. You can find her online at http://www.chriscannonauthor.com