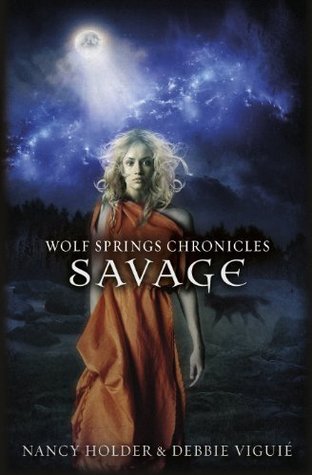 Who do you run to?

Out in the forest, tensions are blazing like forest fire. The ancient rivalry between the Fenner and Gaudin packs has reached fever pitch, and only a battle will quell the blood lust.

Katelyn is caught in the middle, her pack loyalties tested like never before. The person she needs the most – strong, sexy, loyal Trick – has no idea about her dark secrets. And while werewolf wars are raging, the Hellhound is still out there, stalking her every move.

So, after 7 years, I finally was able to find a copy of the last Wolf Springs Chronicles on Amazon.co.uk and complete the series. Yay! The last novel, Hot Blooded, focused on Katelyn’s adaption to pack life. This novel focused on Katelyn’s growth as a war rages on around her and Cordelia. And all the questions surround all the love triangles, the hidden mine, the McBrides, and the Hellhound are answered.

The pace of the story line is rather fast. I’m a slow reader to begin with, yet even so, I didn’t feel I had enough time to absorb one event/discovery before the next. And the few times there was a pause, there was too much teenage angst to process what was happening. However, it did make the novel very hard to put down.

Katelyn is still very self-absorbed throughout this novel, though I’m proud to say I did see some growth in her character, this time round. Seems having the Hounds of God put more responsibility on her shoulders truly motivated her to think beyond herself. Though, there are still plenty of times where she attempts to run away from her problems rather than face them. And fortunately, fate didn’t let her.

***Note: the next paragraph contains a few spoilers. If you would like to skip, continue to the final paragraph.***

The most disappointing aspect of the novel for me was Justin’s death. In Hot Blooded, I fell in love with the blue-eyed werewolf. Therefore, I was not pleased at all when he was killed. First of all, I’m not a fan of the approach when there is even the potential for a love triangle, one of the two characters attempting to win over the main character is killed in the final hours of the final novel. It’s not right. Not when there were other options. Second, though I understand Justin had to pay for his actions (actions taken to protect his brother, Jesse), he had also put his life on the line for Katelyn several times. So, for her to not even stand up for him—at least, try to find a middle ground—when the Hellhound sentenced him to death felt rather low, in my opinion. And finally, I didn’t like the reverse Of Mice and Men ending. Seriously, if anyone should have killed Justin, it should have been the Hellhound, himself. Not Jesse. And it should have been a battle to the death when he was at full strength. For them to kill him right after he suffered multiple injuries and had breathed in silver wasn’t right either.

All in all, though the ending was disappointing, I did enjoy the adventure along the way. If you get the chance to pick it up, I recommend the series.

#FantasyIndiesFebruary
Today, I am opening a path to new beginnings.
Finished my character sketch of Seshat from my WIP, Lost Souls. I love how she came out. Probably my best sketch yet.
Getting closer to finishing my character sketch of Seshat!
Trying something random. I'm giving away 50 e-copies of my short story, Dark Goddess, through BookFunnel.
Pretty impressed how well Seshat's dress came out. Next I have to relook at Seshat's character description to get the right skin tones as well as eye and hair color.
%d bloggers like this: