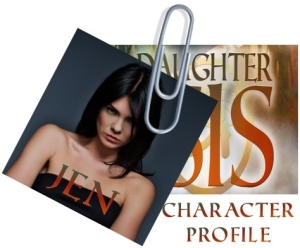 Standing out. Jen doesn’t want to be anything like the girls who fall under Seth’s charm—the popular, high-in-the-sky cheer squad. So she works at making herself to look wild and untouchable. Hence why she has dyed her hair, and since her eighteenth birthday, has been collecting all types of body art.

The paranormal. They are out there! And the best evidence is living right in Setemple: Seth O’Keefe. There’s no way a mortal could be that good looking. Her bet, he’s a vampire.

Caffeinated drinks. She loves her sugar kicks. The burst of energy makes her feel like she do anything. Being hyper is totally her kind of high!

“Drac-O’Keefe’s love-zombies.” Seth has always been attractive—and a charmer—even when they were a small children. But honestly, how many girls can fall at Seth’s feet? Have they no dignity?

Kevin’s hijinks. She knows he’s just jerking her chain, but there are some buttons he pushes that he shouldn’t. Like making Natti his ‘queen’ at the Pharaoh Festival and Jen his servant. Seriously? Sure, they were just role playing, but nobody—nobody!—makes Jen anyone’s servant. He is so going down. 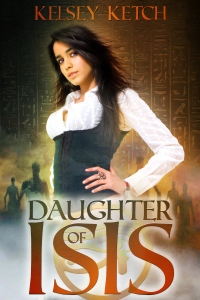 “Her mouth parted slightly, waiting for Seth to breathe life into her own body, just like in the story. She wanted him to awaken her senses.”

The last thing Natara “Natti” Stone wants to do is to start anew at Setemple High School. She wished she had never left London. Yet the brutal murder of her maternal grandmother has made her life very complicated. The only clue related to her murder is an ancient, encrypted necklace Natti discovered after her grandmother’s death. And if trying to adjust to American life is not enough, Natti is being stalked by a mysterious, charming high school senior, Seth O’Keefe, who is annoyingly persistent in his attempts at seduction.

Seth O’Keefe is secretly a member of the Sons of Set, an order that worships the Egyptian god of chaos. Seth’s blessing from Set, his “charm,” never failed, except with one person: Natti Stone. Her ability to elude him infatuates and infuriates him, and he becomes obsessed with the chase. But the closer he gets to her, the more his emotions take a dangerous turn, and he risks breaking one of the most valued covenants of his order. The punishment for which is a fate worse than death.

The adventure this unlikely couple becomes engulfed in could cost them their lives and their souls.