Someone wants Sydney dead. Only problem is, she has no idea who. Pushing her off a cliff, thinking the deadly ocean waves will finish their dirty-work, was their first mistake. The near-death experience opens channels of uncontrollable magic, which Sydney is told should have remained dormant. As if finding out magic is real and hit-lists aren’t enough, Sydney discovers her family lied to her. They were witches too. But they’re all dead. And she’s left to fend off the psychos after her blood with only Luke, her childhood crush turned steamy college student, on her side. Turns out being a witch isn’t as awesome as you’d think, especially when your magic has fatal consequences.

Holding out my hand with my palm up, I started the now familiar process of pulling the object. As before, the bread disappeared with a pop. The molecules buzzed in a swarm like a million bees. I wrangled them with my mind and forced them to reconnect in their previous order.

A few connected. I felt them snap into place.

The air around me stirred. Barbed-wire tightened around my organs, and I forced a few more molecules in place. Right before I lost control. The wind whipped around me, smelling of yeast, with bits of bread. In frustration, my open hand closed into a fist. The wind died. Bread cascaded through the air and floated to the ground resembling snow.

I brushed crumbs from my clothes. At least they weren’t sticky like the cookies. I chanced a glance at Luke’s face then looked away. His tense jaw and shoulders said everything he didn’t.

Three more attempts at spells resulted in the floor being covered in breadcrumbs but no success.

Luke ran a hand through his hair and forced a smile. “Do you want to take a break?”

“No. What else can we try?” I shook breadcrumbs from my hair.

He took a small box from underneath the bread in the bowl. Inside, an ant roamed around the plastic container. He opened one end and tapped until the ant fell onto the table.

I scowled and shook my head. “You want me to kill an ant? That’s cruel.”

“I have a theory we need to test,” he said and busied himself putting the box away.

I swallowed. “You’re the coach.”

“This time you’ll transform the ant into another creature. You need to picture what you want it to become. Think of anything alive.”

I approached the table and looked at the insect scurrying around the surface. “Sorry little guy,” I said to the ant.

With a picture in mind, I poured energy into the small creature. I felt, more than saw, the ant spinning in a circle. The body swelled, growing and changing. More magic poured through the new channels in my brain, this spell demanded much more power than the others we’d tried.
Hair sprouted and grew from the animal’s skin. Spots appeared. The spinning slowed and a cheetah cub rested on the table, taking up the entire top. Not a hint of wind stirred in the room. I blinked and stared.

“I did it,” I breathed. A smile spread my lips wide. I scooped up the ten-pound cub in my arms and rubbed the soft fur. The bewildered animal looked up with wide golden eyes. My heart tapped out a happy dance. A laugh escaped my mouth, and I looked at Luke.
His arms crossed over his pecs, one hand covering his mouth. His attention was glued to the cub.

My laugh cut off, the happy dance turning into more of a death march. “Did I do something wrong?”

He blinked and dropped his arms to his sides. “No,” he said, a smile creased his face. But his dimple was nowhere in sight. “No, you did it right. Perfect. Nice job,” he said in a voice full of worry.

“What’s wrong?” I continued to stroke the cub, more for my comfort than his.

“I’ll change him back to an ant and then we can talk.” He motioned to the cub.

My grip tightened on the warm bundle. “No, I think I’ll keep him around for a bit. We can talk now.”

Luke raised his eyebrows. I met his gaze, daring him to insist.

He sighed, obviously remembering my stubborn streak. “Okay.” He turned and led the way to the study.

“It’ll be okay,” I whispered into the cub’s ear. He sniffed my face then nestled his nose into my neck. His breath warmed the chill Luke’s worry spread over my body. 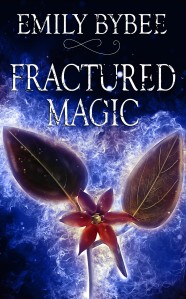 Emily grew up loving to read and escape into stories. She began writing her own at the age of twelve. In college she focused on science and graduated with a degree in Environmental Biology. After college she began writing again but quickly realized she had failed to take a single writing or grammar class. Luckily, she’s a quick learner. Emily now lives in Colorado with her wonderful husband, three amazing children, and way too many animals. She still enjoys making up stories and can’t seem to leave out the paranormal elements because they are just too much fun.

Want to win a $10 Amazon gift card? Subscribe to the author’s newsletter and she will pick a winner! https://www.emilybybeebooks.com/