Tennis. There’s nothing like being out on the tennis court. The fast pace. The pounding of one’s heart. The tension. It’s an exhilarating experience. One that keeps Natti’s mind off her troubles, such as her mother’s and grandmother’s deaths.

Her family and friends. Natti hates that fact she’s been forced to leave them all behind, and possibly, in the hands of a crazed cult. But really, what choice did Seth have? He was trying to save her life. And if either she or Seth set foot in Setemple again, they both would be killed!

Puzzles and riddles. Natti has always been pretty good at piecing together clues—well, most of the time. It’s like she was born for it. And if she could just get Seth to translate the Ancient Egyptian hieroglyphs in her grandmother’s locket, maybe she could piece out where Ra’s secret name is located, before it’s too late.

Sean O’Keefe and the Sons of Set. Seriously. They were the bastards that kidnapped, tortured, and nearly killed her! All because of a family secret Natti hardly knew anything about—which she kept trying to tell them, over and over again. It’s a bloody wonder she hadn’t gone mental from the experience.

Being on the run. It’s not like its one grand adventure or a fun, weekend road trip. She’s running for her life! Anyone, anywhere, could be assisting the Sons of Set with tracking them down. Worse, not even the Daughters of Isis can help them now. There are no allies in this game. There’s just her and Seth.

Secrets. At least if Seth lied to Natti, she could detect it. She could call him out and force him to confess the truth. But her heart has no way of telling the weight of a secret. She’s completely in the dark. And if the secret involves either her or Seth’s fate, she wants to know about it. He’s not alone in this fight. They’re in this together.

Quote: “No. I only thought you were a spoiled rotten rich kid whose only charm was his father’s money.” A malicious grin spread on her lips. “And I still stand by it.” 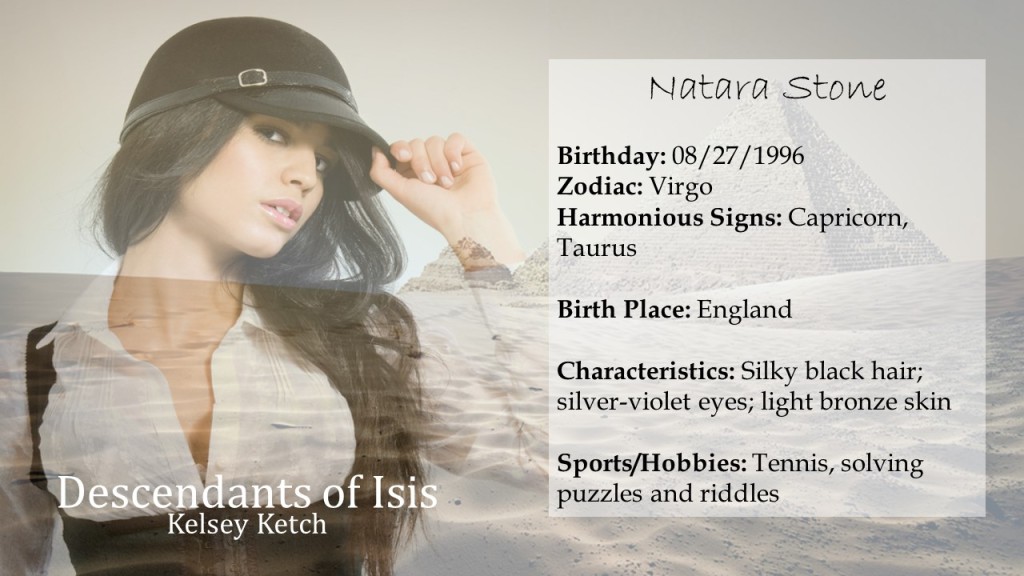 Seth O’Keefe has broken the laws of his god. He never thought he would sacrifice his own future to protect a Daughter of Isis. But when the Sons of Set discovered Natti is the Secret Keeper, he had no choice. Now, Seth and Natti are on the run from his father, who wants nothing more than to see Seth dead. With no allies, Seth turns to the Daughters of Isis for help, hoping they would protect Natti. But when they meet the Daughters, he discovers a secret that puts both their lives in more danger. Low on options, Seth sees only one possibility for survival. He must help Natti solve an ancient puzzle and find the secret name of Ra.

Natara “Natti” Stone is having a hard time swallowing the truth. She can’t believe what she has learned in the past twenty-four hours: Seth is a Son of Set blessed with charm; she is a Daughter of Isis blessed with a sliver of Ma ‘at; the locket her grandmother gave her holds an ancient Egyptian secret linking to Osiris and Isis. That along with being tortured and brutalized by the Sons of Set, she can hardly hold herself together. Thank God for Seth’s touch! That warm, tingling sensation that drowns it all out. Yet her heart struggles to stay focused. She must quickly embrace her destiny before the secret name of Ra falls into the wrong hands.

So, the installer never showed yesterday. Day wasted. They are supposed to be here this morning. Crossing my fingers. I also have class on top of it. Yeah, not expecting to get anything done (again).
Last day of house-related installs/fixes. Also, last week of classes before final exams. I am so dead on my feet. Can't wait for a break where I can focus on #writing.
Happy #Caturday! I asked Litten if he would model next to one of my books. I guess he didn't expect it to be the one with a vampire black cat. 🧛‍♀️🙀😆
Can't believe it's December 1st already! Where do the years go? Kind of dreading next year, even though there are some exciting things as well, particularly for my #writing. *Deep Breath* What happens will happen. I have no control.
Many thanks to those who purchased one of my books and/or downloaded one of my free short stories this month!
Wasn't feeling well, yesterday. So I took an extra day off. Now I need to pull myself out of bed and catch up on work. Homework as usual, but I want to work on my secret #writing project as well. Been a week since I written anything.
Loading Comments...
%d bloggers like this: