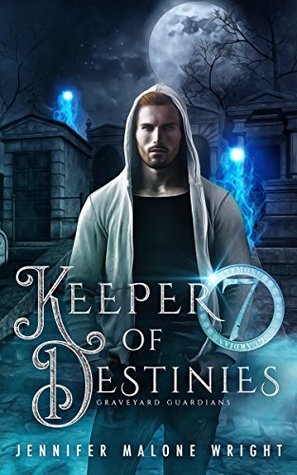 He is a Keeper of souls and she can see what his future holds.

As the oldest of seven siblings, Greg has always been the one to protect his brothers and sisters. He is also a guardian of souls, keeping the spirits safe from the soul-eating Reapers. With so much responsibility, he hasn’t had much time to concentrate on his personal life. But that all changes when Emily knocks on his door and tells him she has to move in with him.

Emily is Seer who can see visions of the past and future. After an unexpected flash of what fate holds for Greg, Emily finds herself once again involved with the Estmond family and their war with the Reapers. She goes to the family to warn them, but the last thing she expected was to develop feelings for the man she simply wanted to help.

Jennifer also loves coffee, has a passionate affair with red bull, wishes the sushi were better where she lives and dances while she cleans.

Going to try and get all the outdoor activities and tasks done before the heat of the day sets in, which has been around 10:30 AM. Then I'm locking myself up inside. Probably #write for 30 minutes to an hour.
New Gist on Readerly for The Epics of Enkidu, Issue 3 by @a_h_amin. I recommend it!
Wrote my first Gist on Readerly (a new reader site/app). Unfortunately, the book wasn't my cup of tea.
Wishing I could head to the beach. Unfortunately, my booster has expired (can't get the second booster due to CDC guidelines), and now, the weather is too hot. 🤷‍♀️ Just going to fantasize about it for a bit.
It's bath day, and Litten is like "what hit me?!"
I don't talk much about my troubles, but like my character from Bly, I do suffer from anxiety. Be sure to take time to take care of yourself. You are more important than you realize.
%d bloggers like this: