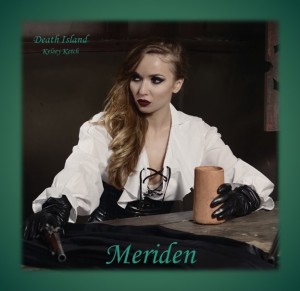 Today, we’re honored to meet Meriden Cummings, one of the main protagonists of Death Island.

Meriden, great having you with us. How are you settling in with the crew of the Orion?

MC: Not that well, I’m afraid. As many of the men that have finally accepted my presence aboard, many are uncomfortable having a woman on board, much less working besides one. Fortunately, I’m used to having to prove myself in a man’s world after working in my father’s carpenter shop.

And what about this new crew member we heard about?

The ship’s cook was saying you were growing close with one of the ship’s newest members. A Mr. Gregory Wilson. Care to share anything about your relationship?

MC: *Cheeks turn red as she grumbles* Matthew. . . . There isn’t a relationship. I hardly know, Mr. Wilson. We met briefly in my village before the both of us set sail on the Orion. That’s all.

But do you think there could be a spark between Mr. Wilson and you?

MC: *Shrinks in her seat and fidgets* Not likely. Maybe friends, at most, but nothing more.

Right. Tell us, what is it like to be at sea?

MC: *Straightens back up, eye sparkling* It’s the best feeling, ever. Despite the hard work and dangers—both from mother nature and because of my gender—the salty breeze, the crashing waves, and the wind catching the sails all give me a sense of freedom I never felt in England. I love it. I love being at sea, letting all the pressure I was once under wash away.

According to the ship’s cook, the sea is in your blood.

MC: Matthew obviously likes to talk. Maybe I should spill a few of his secrets in return. But in response to your statement, he’s right. My great grandfather was once a Naval officer before turning to piracy. But like my father, he mysteriously disappeared at sea. It’s his legacy I want to learn more about. I want to find out what happened to him after he attempted to find Death Island. That’s why I’m here. To learn about my family’s past and find my own path.

What do you think happened to your great grandfather?

MC: *Shakes her head* I’m not really sure. Legend states that the island is ruled by the Mayan god of death, and that my great grandfather’s disappearance is linked to an ancient curse. *Rubs her hand and wrist* I have my reasons to think the legends might be right.

Do you, in some way, feel you might be cursed, as well?

And the last question: what’s your poison of choice?

Well, that’s all the time we have. Thank you for being here with us, Meriden.

Readers, be sure to check out Meriden’s story in Death Island.