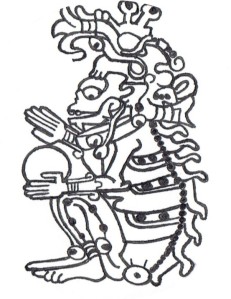 Ah Puch is one of many names associated with the god of death in Mayan religion. He is the ruler of Metnal (Xibalba), the Mayan underworld. To the Quiche Maya, he was the sole ruler of the underworld. But to the Yucatec Maya, he is one of many, with Metnal being the deepest circle of Mayan hell. He is the patron of the number 10 and the 4th day of the 260-day calendar, Kimi, which means “death.”

Though also related to childbirth and beginnings, Ah Puch is not depicted as a kind god and said to work against the gods of fertility. He is also known to stalk the homes of the sick and/or injured. The only way to escape Ah Puch’s attention is to howl, scream, and moan as loud as possible. This way, the god will assume you are already being tormented by his lesser demons.

The Mayans often depicted Ah Puch as a skeletal figure with protruding ribs and a skull or an owl’s head. He is also can be depicted as a bloated figure, such as a corpse in decomposition. As Cizin, he’s a dancing skeleton smoking a cigarette. As Yum Cimil, he wears a collar of eyes or empty eye sockets and has a body covered in black spots. Yet, what Ah Puch is known for most is wearing copper or gold bells in his hair, much like the Aztec god, Michlantecuhtli. Not just for decoration, but to strike fear in his prey.

He is also associated with dogs and owls. Therefore, if an owl screeches, it is believed someone nearby will die. And if a hoot is heard, one should take a deep breath and count to ten.

So, the installer never showed yesterday. Day wasted. They are supposed to be here this morning. Crossing my fingers. I also have class on top of it. Yeah, not expecting to get anything done (again).
Last day of house-related installs/fixes. Also, last week of classes before final exams. I am so dead on my feet. Can't wait for a break where I can focus on #writing.
Happy #Caturday! I asked Litten if he would model next to one of my books. I guess he didn't expect it to be the one with a vampire black cat. 🧛‍♀️🙀😆
Can't believe it's December 1st already! Where do the years go? Kind of dreading next year, even though there are some exciting things as well, particularly for my #writing. *Deep Breath* What happens will happen. I have no control.
Many thanks to those who purchased one of my books and/or downloaded one of my free short stories this month!
Wasn't feeling well, yesterday. So I took an extra day off. Now I need to pull myself out of bed and catch up on work. Homework as usual, but I want to work on my secret #writing project as well. Been a week since I written anything.
Loading Comments...
%d bloggers like this: