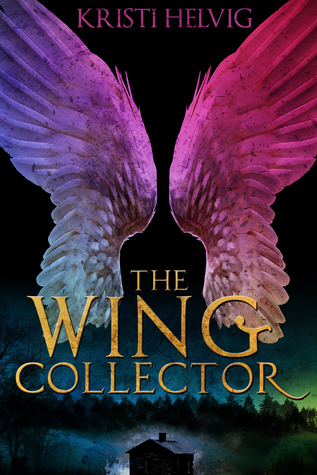 Due to prejudice and hostility by humans, half-human/half-faerie Lila lives in a world where faeries are required to register with the government and bind their wings in order to look like everyone else. Her fear of being discovered results in a pathetic social life and unfashionable clothing options—fitted tops just don’t provide adequate wing coverage. The increase in murders around her home in Chapel Hill, North Carolina causes Lila to withdraw further, and she accepts her relative isolation as a small price to pay for her safety… until the day she meets new boy, Ash Cooper.

Lila is haunted by repetitive dreams involving a shack in the woods, and when photos of dismembered wings appear in her school locker, she soon realizes that she is the killer’s prime target. As faerie corpses pile up around them, Lila embarks on a mission with Ash to save her race from extinction. She must figure out who she can trust and stop the killer before she—and all faeries— are obliterated forever.

The Wing Collector was a good read with an interesting plot. It’s very similar to Dan Brown’s Angles and Demons in style with the added teen drama one finds in high school settings. There are two points of view in the novel, Lila’s and the Wing Collectors, which makes it an interesting read. And the novel flows perfectly from one point-of-view to the next. I never felt lost in the main timeline, and I was interested in learning who the Wing Collector was up to the very end. However, what weighed this novel down in every aspect was the lack of details throughout the story-line. In the case of the plot, it was the lack of background and motive. For instance, there is a mention of the Fairy Wars, yet there isn’t any real information on how they really influenced the current situation occurring in the novel or the behaviors of the humans and half-fairies. There was also a lack of explanation of why the Fairies (Pure Ones) started the war to begin with other than to conquer (which sounded too science fiction for me). Usually there is more to it, such as resources, religion, etc. Nor does it mention when the wars occurred. Was it during Queen Mab’s reign in European mythology? Or was it as far back as the ancient Sumerians, who believed they were created by winged gods?

Another factor where detail would have helped is with the setting. The novel takes place in Chapel Hill, North Carolina, which I live about 30-45 minutes from (depending on traffic). Yet the feel of the story and few settings that were described, I felt the story better set in Boone. And with the very little details about the high school, itself, my brain kept defaulting to my high school in Colorado—which I’m sure looks very different than the one in Chapel Hill. The one thing I felt did connected to the local area was the current local politics. Unfortunately, I also didn’t see any real reason why the local politics were included in the plot.

The main character, Lila, and love-interest, Ash, were both well developed characters and provided great romantic chemistry through the novel. The only thing I didn’t like about Lila is she saw herself more of an alien than a mythical creature. Her mind thinking the government would do experiments on her if she turned to them for help, when in fact, the government already knows the existence of fairies and has them register at birth. In addition, small details such as only reading one side of Lila’s phone conversations detached me from her while reading. I wouldn’t mind so much if the novel was in third person, but being in first, I feel readers should always feel connected to the main character’s current situation (past tense or present tense).

As for the Wing Collector, I feel he was very underdeveloped. There was no mention of motive through his view point, and some of his statements at the end of the novel contradict his previous thought-line. I also dislike when antagonists are made to be so inhuman. Every antagonist has a background story, some sort of family, passion, emotional and physical scars, etc. But in this case, none of that was really revealed until a small rant at the end of the novel. Also, the timeline for the Wing Collector seemed off, especially later in the novel when his true identity is revealed. Even with the amazing plot twist, this little detail threw off the “surprise” of the reveal for me.

I did enjoy the ending, though. I don’t want to give it away, so I won’t go into it. Let’s just say justice is done, and I’m glad of it. Overall, a good read. I just found the lack of details frustrating, but I’m a detailed oriented person. I like to be swept away. I didn’t get that from this novel, which is why it summed up to a 4 star rather than a 5 star.

One thought on “{Book Review} The Wing Collector”