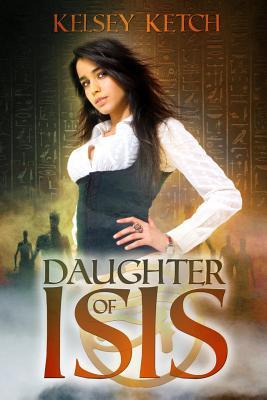 Daughter of Isis by Kelsey Ketch

“Her mouth parted slightly, waiting for Seth to breathe life into her own body, just like in the story. She wanted him to awaken her senses.”

The last thing Natara “Natti” Stone wants to do is to start anew at Setemple High School. She wished she had never left London. Yet the brutal murder of her maternal grandmother has made her life very complicated. The only clue related to her murder is an ancient, encrypted necklace Natti discovered after her grandmother’s death. And if trying to adjust to American life is not enough, Natti is being stalked by a mysterious, charming high school senior, Seth O’Keefe, who is annoyingly persistent in his attempts at seduction.

Seth O’Keefe is secretly a member of the Sons of Set, an order that worships the Egyptian god of chaos. Seth’s blessing from Set, his “charm,” never failed, except with one person: Natti Stone. Her ability to elude him infatuates and infuriates him, and he becomes obsessed with the chase. But the closer he gets to her, the more his emotions take a dangerous turn, and he risks breaking one of the most valued covenants of his order. The punishment for which is a fate worse than death.

The adventure this unlikely couple becomes engulfed in could cost them their lives and their souls.

#TeaserTuesday Son of Set (Descendant of Isis 2) Amazon: http://hyperurl.co/Son-of-Set Other Buy Links: https://wp.me/PWss8-7Dm #YoungAdult #Mythology #Egyptian #Contemporary #Fantasy #Magic #EgyptianMythology #YoungAdultRomance #YoungAdultFantasy
It's not Halloween, but I know what I'm making next year for the spooky season: butterscotch pudding pie with spiderweb. Just felt spooky today. 😆 #dessert
***Cover Reveal*** To Plant a Single Seed by Kelsey Ketch Genre: YA Short Story Release Date: February 2020 Summary: “Each of us has a seed of our own, each as diverse as the person that carries it.” Raised in an isolated world of strict rules, one young woman questions what is the purpose of the seed she carries in the palm of her hand. What is its purpose in a world that already seems perfect and is basically untouchable? Railing against her society, she decides to travel toward the distant tree line to discover her purpose. Goodreads: https://www.goodreads.com/book/show/48916278-to-plant-a-single-seed
Travel to a haunted deserted island in this Horror Fantasy! Dark Reflections Amazon: http://smarturl.it/dark-reflections Other Buy Links: https://wp.me/PWss8-74H Graphic by AllAuthor. #NewAdult #Contemporary #Fantasy #Mythology #Fiction #Horror #ComingofAge #NewAdultRomance #NewAdultFantasy
%d bloggers like this: