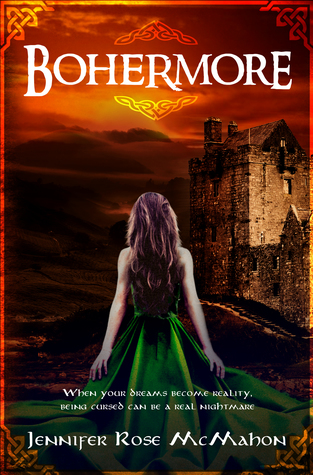 Like a punch in the face, eighteen-year-old Maeve O’Malley’s visions knock her off her path. The pirate queen stalking Maeve in her dreams killed her mother years ago and now, the villain is coming for her. Maeve’s decision to ditch Boston College takes everyone by surprise as she packs her bags, leaves America, and heads to the west coast of Ireland to chase her dreams – and end them.

Maeve uncovers an ancient family curse that refuses to remain silent until she accepts her predestined role in what many thought was only a legend. Her Irish history professor – a man she shouldn’t be falling for – is the only person who understands the origins of her torment.

Maeve’s journey becomes a medieval treasure hunt through Ireland’s castles and ruins as she tracks the wrathful pirate queen who has her marked for vengeance.

It’s been a few years since I last reviewed a book, so bear with me a bit. I know many authors don’t normally review, but I started as a book blogger before I became an author. And honestly, I miss it. So, I’m going to try to post a review now and then when I can. 🙂

When I first discovered this novel, I was so excited because it involved the famous pirate, Grace O’Malley; one of the women pirates I admired when I was back in high school. On top of that, it was set in Ireland. The plotline and settings didn’t disappoint. I loved the mystery of the curse—realistic nightmares Maeve experienced that later become actual hauntings. These visions led her into different cities and ruins across Ireland’s beautiful landscape. These aspects were what captivated me and kept me reading. More so than the characters or the romance.

Maeve was likeable, but not relatable. The biggest reason for this is that she had no background. Throughout the novel, there was no mention about her life before college, or how her and her mother’s curse affected her life, or what happened to her father. Heck, I’m still wondering how Maeve and her mother kept her mother’s maiden name. There was no past. No depth. Basically, Maeve’s life began in college. On top of that, the relationships in this novel, other than Paul and Maeve’s, felt superficial. There really was no connection between her and Michelle or her and Rory.

Though, I’ll be honest, when Rory was first introduced, I was really hoping he would become the stronger love interest over her professor, Paul. Mostly because I don’t feel comfortable when professor-student relationships are encouraged. Fortunately, the forbidden relation was already mentioned in the summary, and I was prepared when the relationship began midway through the novel. And in the end, Paul was one of the best written characters in Bohermore. I just wish he was a graduate student instead of a professor.

However, the real short coming of this novel was the flow. On average, every other page had a section break or a sudden change. This made the novel very difficult to read. Especially when Maeve was at the airport one minute, then at her flat in the next. Or how Maeve and Michelle met in the street outside Maeve’s flat, then suddenly, they were at the bar in the next paragraph. It was like that through the majority of the novel. Even the ending had too many sudden jumps between events. Which I, personally, found very distracting.

In conclusion, this is an intriguing New Adult novel. Unfortunately, I can’t recommend this book due to the romance, which is the majority of the plotline, and because the choppy flow. But I will say the mystery and atmosphere was still worth the read for me, personally.