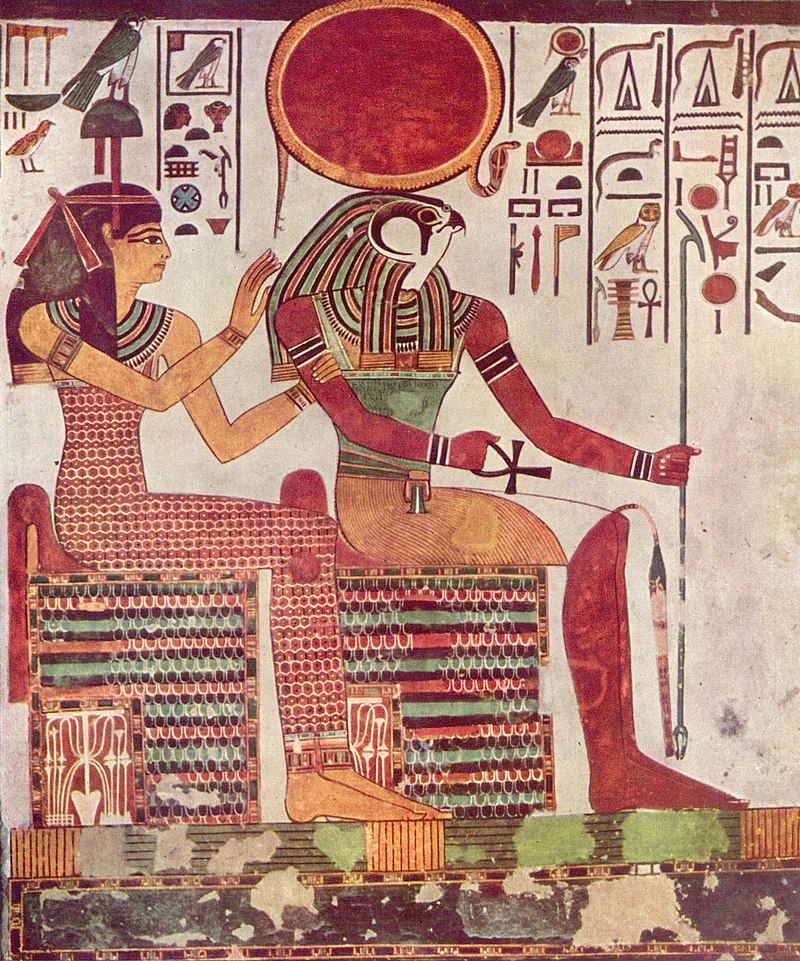 Ra is an essential background character in the Descendants of Isis, for it is his secret name which Natara and Seth have to protect from Set. The Egyptians considered the sun to be a potent life force, with Ra as the pre-eminent solar deity. He was self-created, born from the primal waters of Nun (chaos); thus, making him the king of the gods. However, he is not as old as other gods in Egyptian culture. The first reference to Ra dates back to the 5th Dynasty. During the Middle Kingdom, Ra was absorbed by Amun, becoming Amun-Ra, only to be separated again during the New Kingdom.

Often depicted as the father of the gods, Ra spat forth Shu (god of air) and Tefnut (goddess of moisture), and is considered the grandfather of Geb (god of earth) and Nut (goddess of the sky). When Nut became pregnant, Ra decreed she could not give birth on any day of the calendar, forcing Thoth to win five days from the moon so Nut could bear Osiris, Isis, Set, and Nephthys (and saving one day for Horus). Represented anthropomorphically, Ra often was depicted with the head of a falcon or ram with the sun disk over his head. Ra is described as having the bones, flesh, and hair of an old man, but made from silver, gold, and lapis lazuli.

Ra would voyage across the sky during the 12 hours of daylight, and through Duat during the 12 hours of night. In one myth, Isis secretly created from mud and Ra’s spittle and laid it one day in the middle of Ra’s path. The snake bit him, but as hard as he tried, he could not banish the poison from his body, since the snake was made from a part of him. Finally, he called forth Isis, for she was the goddess of healing and magic. In order to heal him, Isis stated that Ra had to give her his “true” name. He tried to trick Isis, listing all his known titles and names. Isis held her peace, knowing all these names were not the one she sought and waited. Meanwhile, the power of the poison increased. Finally, when the pain was too much to bare, Ra willingly gave Isis his name. There are several versions telling why Isis had created the snake and poisoned the sun god. One of which was to receive the power of creation, so that she might resurrect her husband, Osiris. Another was because Ra had torched the fields and created a drought, so Isis used the name to banish him to the sky.

Another myth I’m currently using as part of the background for my WIP, Dark Reflections, Ra ruled as pharaoh until he had become old and weary. His people had lost respect for him and no longer obeyed his laws, so Ra decided they should be punished. He sent out Sekhmet, his daughter known as the “Eye of Ra,” to teach them a lesson. But when her killing spree slaughtered thousands of ancient Egyptians, he had to arrange to get her drunk with blood-colored beer. After she slept for three days, her blood-lust had been cured and Ra left his throne to Horus to travel across the sky.