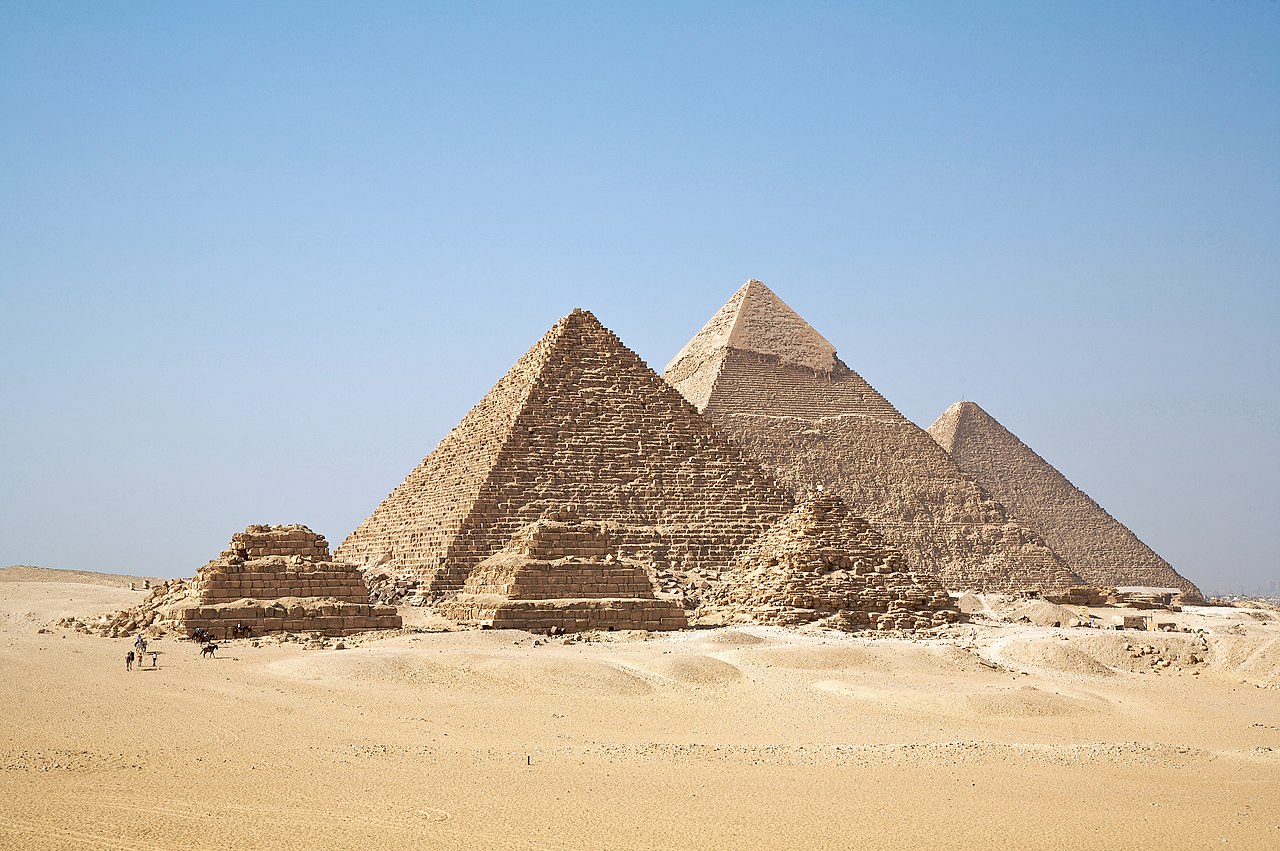 It took the ancient Egyptians about 400 years to progress from using building materials such as wood, reeds, and mudbrick to smooth-sided pyramids. The first building in the world constructed completely in stone was the Step Pyramid, designed by Imhotep for King Djoser. The Step Pyramid was developed from the mudbrick royal mastabas (mounds that were built as graves for the upper echelons), becoming a stone-built tower consisting of 6 massive steps reaching the height of 200 feet. It was said to represent a ladder for the king to climb to join the “imperishable stars.”

Two of Djoser’s successors attempted to build step pyramid complexes and failed. Sixty-five years after the Step Pyramid, Sneferu’s Meidum Pyramid complex set the pattern for the rest of the Old Kingdom. It consisted of the main pyramid and at least one subsidiary pyramid within the enclosure with a mortuary temple. For some unknown reason, however, Sneferu abandoned Meidum and went on to build the Bent Pyramid and Red Pyramid. The Bent Pyramid seems to have been an experiment. As a small pyramid, it was build with a slope of 60 degrees, which threatened the structure to collapse. So, they added layers around the inner core and altered the angle. The Red Pyramid, on the other hand, is perfectly constructed. Built of local limestone containing oxide (hence the red color), it’s recognized as the first true pyramid.

The first step in building a pyramid was to choose a suitable site. It had to be on the west bank of the Nile and situated on high ground. Workers would prepare a firm foundation by removing loose sand from the rock and making it absolutely flat. Astronomers would align each side of pyramid with one of the cardinal points. Next, they had to make the base perfectly square. The inner chambers and passages would be constructed independently and the pyramid built around it. Surveyors would mark the plan of the pyramid with the aid of thick ropes, and stone-cutters would start to extract the local medium-quality stone. When the main structure was complete, the pyramid was encased in blocks of finely cut and dressed limestone, giving it a perfectly smooth and shiny exterior. The last stone placed was the pyramidion, a stone cut from one piece of stone and coated in electrum.

Building the great pyramids took between 20 and 30 years. It made use of all the country’s resources and required extraordinary organizational skills.

Pre-Order Links: books2read.com/Dark-Goddess
How is it almost July, already? I had plan to reveal my #WIP title next month. Also, I need to finish a guest post for my Dark Goddess Blog Tour and prepare a Newsletter for Dark Goddess Release Day. Yikes. Better write this down.
My first attempt at cooking kafta kabob. Served with frozen corn and crispy cauliflower florets.
Morning! Been crazy around here, so I thought I take a break from the madness and see where my follow writers and followers are from. And/or tell me one place you love to visit.
Thank you to all those who purchased my books, so far, this month!
Yesterday was a hard day to swallow, but I also know that together we got this. Keep moving forward.
Loading Comments...
%d bloggers like this: