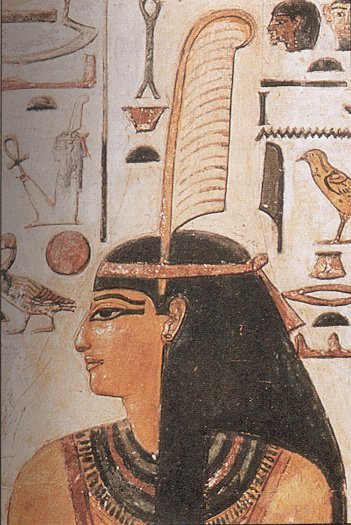 Ma ‘at was important to the concepts of the universe as well as the balance and divine order in ancient Egypt. Her name translates to “that which is straight.” Ma ‘at came into being when Ra rose from the primal waters of Nun (chaos), born through the power of Heka, the personification of magic. For this, she is considered one of Ra’s daughters and the wife of Thoth because he was the god of wisdom. She first appeared during the Old Kingdom. Her anthropomorphic form wearing a crown with a single ostrich feather, and occasionally, processing wings. The other object usually associated with the goddess is a plinth, or stone platform, symbolizing the mound which first emerged from the waters of Nun.

Egyptians had a strong sense of morality and justice. It is thought that even Ma ‘at priests were involved in the justice system as well as tended to the goddess needs. They felt it important to have a balanced life. Not perfect, just balanced. In mythology, after Set was defeated, Ma ‘at gifted the god two wives, Astarte and Anat, in return for Horus taking the throne—to restore balance. Though she had no temples, one worshipped the goddess by living a life in accordance with the highest principles of justice, order, and harmony; keeping in mind one’s neighbors and the earth.

Both the concept and the goddess of Ma ‘at are important to the Descendants of Isis series. Mainly because the power Natara is gifted with stems from a small piece of Ma ‘at’s ostrich feature.

5 thoughts on “Ma ‘at, Goddess of Truth”