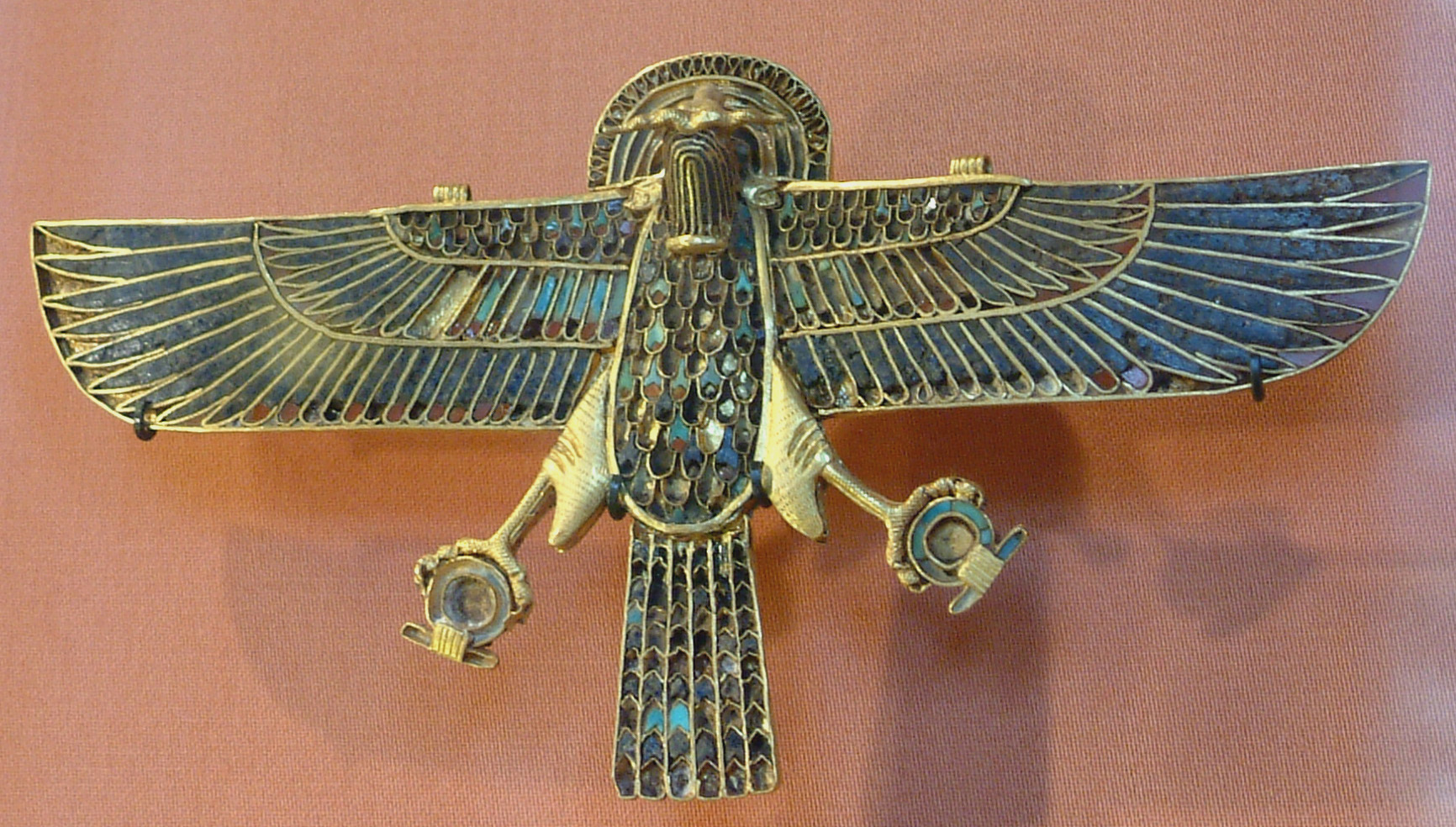 In Daughter of Isis, the mystery and adventure begin when Natara finds an Egyptian amulet: “She brushed her thumb over the round bronze pendant that was about an inch in diameter and a fourth of an inch thick. The Eye of Horus was etched in the center, its pupil made of a smooth reflective piece of silver. She noticed the small latch along the side and pulled it. The pendant swung open, much like a large locket except it contained engraved columns of hieroglyphs inside.”

Egyptians had been wearing jewelry since the earliest times. What distinguishes it from other jewelry is not its beauty and perfection, but its magical properties.

Jewelry was made with a range of materials. Gold, copper, and silver were the most commonly used materials, but gold was the most divine because it was regarded as the flesh of Ra and the other gods. In the Old Kingdom, ostrich eggshells, turtle shells, horns, bones, and ivory were used to adorn these metal pieces. Later, Egyptians started using precious and semiprecious stones such as agate, amethyst, emerald, feldspar, lapis lazuli, malachite, and obsidian. Each color and material designed with a magical property in mind, primarily protection. Decorative symbols included the ankh, djed pillar, Eye of Horus, and the scarab.

Men and women accessorized with jewelry to enhance the delicate white linen garments and heavy curly wigs. Certain pieces were associated with status such as the broad collars, which indicated high status. Other items like anklets, bracelets, armlets, rings, necklaces, diadems, earrings, and studs were worn by those who could afford them. When a member of nobility or royal family died, the most important objects and jewelry that formed part of the decease’s life were included in their burial. Other uses for jewelry were in rituals or to adorn temples and palaces.

Trying to get into a little Christmas magic.
Litten looking sad under the Christmas tree. Just started putting up Christmas items. Not sure why he looks sad about it.
Installation finished yesterday, so life can go back to semi-normal. Homework, a few chapters of my secret #writing project, and grocery shopping are all on my list for today. Hey, #writers have to eat, right?
So, the installer never showed yesterday. Day wasted. They are supposed to be here this morning. Crossing my fingers. I also have class on top of it. Yeah, not expecting to get anything done (again).
Last day of house-related installs/fixes. Also, last week of classes before final exams. I am so dead on my feet. Can't wait for a break where I can focus on #writing.
Happy #Caturday! I asked Litten if he would model next to one of my books. I guess he didn't expect it to be the one with a vampire black cat. 🧛‍♀️🙀😆
Loading Comments...
%d bloggers like this: