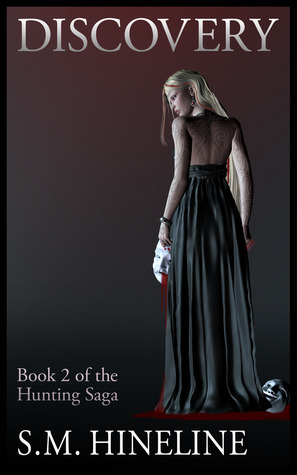 There is a serial killer targeting young women in Chicago. The police assumed their suspect was human. When the evidence points to a vampire, Jade and Aldora are called in to work with the police. They must stop the killings and bring the vampire responsible to justice or risk a scandal that could cause the United States to rethink their position on the rights of vampire kind. Dealing with a rash of murders, trying to work with the human police, and raising a baby vampire…what could go wrong?

Discovery was an enticing vampire mystery, and compared to Hunting, the first novel, which I still enjoy, I felt this novel was better written. Especially with the first person POV with Jade. In the first novel, I felt she was bit of a robot. But in this novel, I liked seeing her vulnerability every once and a while. Though most of it was behind closed doors, which really tore me up inside. I just wanted her to confide in someone. Maybe Mordecai, or in a sudden moment of rage and weakness, to the new Detective Fisher (which I could also see as yet another potential romance, but more the love/hate kind).

I also really enjoyed that there was more dialogue. Notably Kitsu, the newly introduced vampire of the group. I loved her attitude and how she still acts very much like a human teenager. The only thing I felt was wrong with her, for a foreign vampire, was that she was very American. I would have loved if there were some little notable differences, like any sort of appropriate slang.

However, there were some things I did miss about the first book. It had more action. I felt like Discovery was written so that most of the adventure and thrill occurred off screen. Actually, in my personal opinion, it seemed the characters were more focused on every little thing the vampire baby, Gemini, did more than the victims or mystery itself. Don’t get me wrong, Gemini is cute and all, but I would rather they stick it to Taurean and the people responsible for the murderers.

Now, pulling on my Sherlock deer stalker cap, I must say there were also some loopholes in this case. Particularly around some of the forensics. I still don’t understand how an X-ray, which only shows bone and dense material in the body, could prove the culprit was a vampire. Maybe if they bit hard enough to impact the bone? I’m not really sure, since we never really got to see the evidence, but I found it perplexing. I would’ve thought a CT scan, which shows soft tissue, would have been more likely to expose such evidence.

And finally, I couldn’t believe that the coroner wouldn’t even provide the smallest amount of DNA for magical analysis. Seriously, they had to have provided police forensics with hair samples and scrapings from under the nails. So why deny a few strands of hair to the paranormal team when asked? I found this most disconcerting, especially since the common goal was to catch the killer; not a race to see who could catch him the fastest.

Overall, it was a wonderful story! I can’t wait to read more in the series and see what Taurean is up too. I hope he gets dusted!