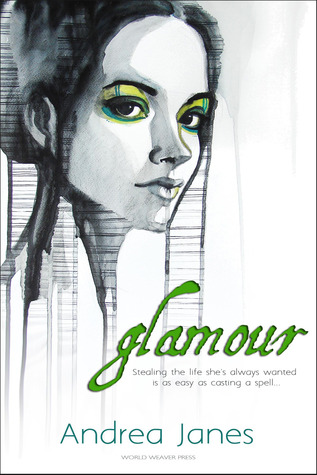 Stealing the life she’s always wanted is as easy as casting a spell.

Townie. That’s what eighteen-year-old Christina Sundy is. All year round she lives in a one-stoplight town on Cape Cod, and when summer comes, she spends her days scooping ice cream for the rich tourists she hates. So when one of them takes a job in the ice cream shop alongside her, she’s pissed. Why does a blonde and perky Harvard-bound rich girl like Reese Manning want to scoop ice cream anyway?

Something else weird is happening to Christina: tiny blue sparks seem to be shooting off her fingers. It isn’t long before she realizes the truth about herself — she’s actually a powerful hereditary witch. But her newfound powers are too intense for her to handle and, in a moment of rage, she accidentally zaps Reese into another dimension.

So that no one will notice that the rich girl has disappeared, Christina casts a disguising spell, or “glamour,” and lives Reese’s life while she tries to find a retrieval spell.But as the retrieval spell proves harder than anticipated, and as she goes about living Reese’s life without anyone on the outside noticing the switch, Christina realizes that there’s nothing to stop her from making the glamour permanent… except, of course, her fellow witches, a 16th century demon, and, just maybe, her own conscience.

I’m secretly Canadian. I’m from a place called Brampton, Ontario, which is where Michael Cera is from.

I have no idea. It must be some kind of curse, I guess. No one would willingly choose to be a writer… would they? I started reading at four and wanted to be a writer since I was six, so basically I can’t remember why or remember a time when there was ever any other idea in my mind.

What inspired your paranormal YA novel, Glamour?

GLAMOUR, was in a large part inspired by some of the friendships I’ve been lucky enough to have in my life. It’s also party inspired by trips to New England summer towns which are seriously filled with more ice cream shops than you can shake a stick at. What’s the deal with all that ice cream?

What was it like to write Christina and her switch with Reese Manning?

It was confusing at times, but really fun. It was a challenge to imagine the actual details of what inhabiting another person’s life would be like. How would you get a copy of their house-keys? Where do they keep the towels? It’s more complicated than people realize.

What got you into writing about the supernatural and witches? What kind of research did you do for the backstory of your novel?

I’ve always been really interested in witches for some reason. When I was little my dad took me to the Salem Witch Museum; maybe that started it. I also used to go to the library as a child and read everything I could on the European witch trials. I mean, I was really young when I was doing this. Like, inappropriately young. I remember sitting in the kid’s section hiding low down in the stacks and surreptitiously reading about thumbscrews and the rack.

I’m writing a horror novel now about a haunted condo in the Rockaways. That’s in Queens. It’s not a YA novel.

I don’t think I should be giving advice to anyone on anything, ever! Maybe, whatever I do, don’t.

It’s actually hard for me to find a good place to write. I get restless and I hate sitting still for long periods of time. I’ll let you know when I find one.

I’ll read almost anything in any genre but I generally steer clear of fantasy (with some exceptions) and romance.

I like things that change, so anywhere with four seasons works.

Marrying my husband! Turns out that guy’s amazing.

Andrea Janes writes horror, dark comedy, thrillers, and historical slapstick. She is the author of Boroughs of the Dead: New York City Ghost Stories. She is also a licensed NYC tour guide, and offers a variety of ghostly tours around the city. Her many obsessions include New York City history, old photographs, Mabel Normand, all things nautical, and beer. She maintains a personal blog over at Spinster Aunt, where she discusses these obsessions in more detail than is probably healthy.

My first attempt at cooking kafta kabob. Served with frozen corn and crispy cauliflower florets.
Morning! Been crazy around here, so I thought I take a break from the madness and see where my follow writers and followers are from. And/or tell me one place you love to visit.
Thank you to all those who purchased my books, so far, this month!
Yesterday was a hard day to swallow, but I also know that together we got this. Keep moving forward.
#Reading #Readerly #amreading
Buy Links: books2read.com/ASingleSeed
Loading Comments...
%d bloggers like this: