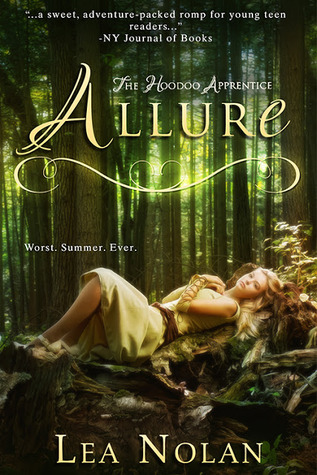 Emma Guthrie races to learn the hoodoo magic needed to break The Beaumont Curse before her marked boyfriend Cooper’s sixteenth birthday. But deep in the South Carolina Lowcountry, dark, mysterious forces encroach, conspiring to separate Emma and Cooper forever. When Cooper starts to change, turning cold and indifferent, Emma discovers that both his heart and body are marked for possession by competing but equally powerful adversaries.

Desperate to save him, Emma and her twin brother, Jack, risk their lives to uncover the source of the black magic that has allured Cooper and holds him in its grip. Face with the horror of a soul-eating boohag, Emma and Jack must fight to resist its fiendish power to free Cooper long enough to join their strengths and face it together, before it destroys them all.

Beautiful cover! But overall, Allure wasn’t half as appealing to me as the first novel, Conjure. I found the first 230 pages not only disappointing, but frustrating to the max. It was long, boring, and the characters were really starting to get on my nerves.

Emma seemed more ignorant than in the previous novel, and was completely blinded by her emotions to the point where I had to wonder if she was paying attention to any of the obvious clues around her. Especially when it came to Teneea, her behavior, and the affect she had on Cooper’s judgment. Oh, and Cooper—GRRR—if I was the main character in this novel, I would have not tolerated his attitude. Typically, I don’t mind a character’s behavior changing, especially when I understand why, but I felt, in Cooper’s case, it was taken way too far. At a certain point, I finally gave up on him. I honestly didn’t care if he was under a spell, a good part of me just wanted the curse to take him and be done with it. Yes, sweet, lovable Cooper made me that mad! Actually, the only character I did like in this novel was Jack, and there wasn’t enough with him to really keep my interest.

What saved Allure from a single star was the last 123 pages. That’s when it started to have the “old gang” feel to it again, despite Cooper still pining after Teneea. Also, it’s where the adventure and mystery finally started to click in. And it was interesting with its twists and turns, some of which I saw coming from the start and some that took me completely by surprise. This was where the story blossomed. But Cooper still has a lot of making up to do before I accept him back with open arms.

In conclusion, I’m going to continue the series since I always loved the concept, but I really was not at all impressed with Allure.

Not completely upset (I knew I wouldn't get far after submitting my job application), but I need to drown myself in ice cream. I'll keep an eye open for similar jobs, after I finish school.
So, not everything has quiet gone to plan with my Burrow Blanket. Two colors (Blue Blood and Plum Wine) were not the colors depicted in the Crochet Wizardry book. Bought a third color, hoping it would be more blue, but it turned out to be another purple. 🤷‍♀️ Anyway, decided to make 34 of each color and make a bigger blanket. From the pattern, I only have five extra squares of five colors to complete a 11 x 18 square blanket. IMO, I actually like it better.
Quote of the Day!
I finished a Python (computer language) lesson, crocheted for 15 minutes, worked on a guest post for 30 minutes, and #wrote for 30 minutes. The path of healing.
Pre-Order Links: books2read.com/Dark-Goddess
How is it almost July, already? I had plan to reveal my #WIP title next month. Also, I need to finish a guest post for my Dark Goddess Blog Tour and prepare a Newsletter for Dark Goddess Release Day. Yikes. Better write this down.
%d bloggers like this: