HAPPY NEW YEAR, EVERYONE!!! The WordPress.com stats helper monkeys prepared a 2013 annual report for this blog. Head on over and check it out.

The concert hall at the Sydney Opera House holds 2,700 people.  This blog was viewed about 53,000 times in 2013.  If it were a concert at Sydney Opera House, it would take about 20 sold-out performances for that many people to see it.

The busiest day of the year was January 15th with 693 views. The most popular post that day was No Strings Attached Giveaway Hop!.

These are the posts that got the most views in 2013.

How did they find you?

The top referring sites in 2013 were:

Where did they come from? 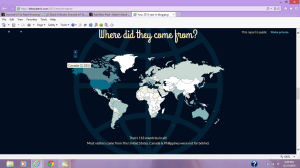 That’s 118 countries in all! Most visitors came from The United States. Canada & Philippines were not far behind.

Your most commented on post in 2013 was No Strings Attached Giveaway Hop!

These were your 5 most active commenters: