The 12 Days of Christmas Just Got Hotter! 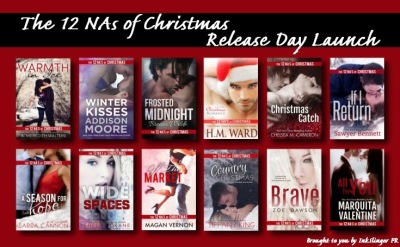 Today we get to share with you the release of 12 New Adult Novellas written by some of our favorite bestselling New Adult authors! These are 12 separate Christmas novellas (not an anthology or box set) that are all releasing today! Some of the novellas are stand-alone and some are related to that author’s existing series. We’re highlighting one of the 12 with an excerpt and the information about that title. Then you can check out each of the titles below!

These novellas are sure to get you ready for whatever you have planned for the holidays. 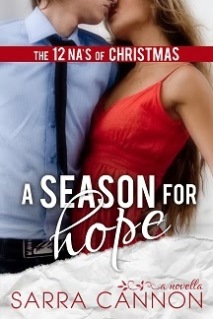 ABOUT A SEASON FOR HOPE:

Being dumped just before the holidays was my worst nightmare. I’d spent so many years thinking Preston Wright was the one for me that when he told me it was over, I thought I’d rather die than face the future.

I never expected someone like Judd Kohler to come crashing into my life. Literally. He was coming out. I was going in. My face got in the way. You get the picture. It was an accident. Running into him twice in one day, though? It started to feel like fate.

My mother always says Christmas is a magical time of year. A season for hope. All I know is that just when I thought I’d lost mine, hope somehow found its way back to me.

Just in time for Christmas.

Sarra Cannon writes contemporary and paranormal fiction with both teen and college age characters. Her novels often stem from her own experiences growing up in the small town of Hawkinsville, Georgia, where she learned that being popular always comes at a price and relationships are rarely as simple as they seem.

Her best selling Young Adult paranormal series, Peachville High Demons, has sold over 140,000 copies and been featured on Amazon’s Top 100 eBooks for Children & Teens. The first book in the series, Beautiful Demons, will be adapted into a graphic novel by Sea Lion Books later this year, and a spin-off series will begin in 2014.

She is a devoted (obsessed) fan of Hello Kitty and has an extensive collection that decorates her desk as she writes. She currently lives in North Carolina with her amazingly supportive husband and her adorable son.

EXCERPT:
“I lean into his hand, my flesh burning under his touch. His fingers twitch slightly, as if he wants to pull me closer.
I want to kiss him, but I’m scared. I don’t want to be rejected again. I don’t want to misunderstand. And I don’t want to fall too fast just because I’m so hungry for something to heal my broken heart.
But I’m helpless to stop it.
When he leans down, he stops short, waiting for me to make a decision. I lift my head ever so slightly and he closes the space between us, his fingers tangling in the hair at the nape of my neck. He takes my mouth more forcefully than he did last night, and my body lights up at the first meeting of our lips.
Our lips open and explore. Our tongues dance, tasting for the first time.
My hands slip around his waist. I’m so aware of the fabric at the edge of his shirt, wanting nothing more than to slide my hand under and up. To feel the warm skin underneath and the hard muscles I know I’ll find along his back.
I want it so badly, I almost can’t control the desire.
He releases my lips and moves his kisses along the line of my chin. When he gets closer to my ear, he whispers, “You’re so beautiful.”
I immediately want to tell him he’s wrong. That he must not see me for some reason. But I hold it in, letting myself hear him. Not quite believing, but for the first time in a long time, wanting to believe.”