I’m in COVER LOVE right now! I’ve once again got Megan and Nick on the cover, but this time you get the chance to stare into those stunning eyes that just scream Don’t f*** with me. However, that is not Nick on the back. That is the unconscionable Zander Malone, who thanks to the authorities, has his blond locks rockin’ a darker hairdo to help stay off the radar a bit. Of course he’ll be making an appearance in Nearly Mended, but for how long and whether or not he’ll obtain any pleasure while there, I won’t say! But he has definitely got some wicked things planned this time around.

Oh…and did I mention it’s dual point-of-view this time? Both Megan and Nick will be gracing us with their thoughts and opinions in Nearly Mended. I’ve dabbled with the idea of getting into Zander’s sick head a time or two, but in all honesty, I’m still against it, forcing us as readers to learn only what he wants us to know. 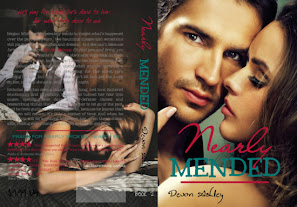 Megan Whitaker desperately wants to forget what’s happened over the past two years – the haunting images and sensations still plaguing her thoughts and dreams – but she can’t. Because he’s still out there. Zander Malone. I’ll find you and bring you back to me. She wants to believe she’s safe with Nick in their secluded new home, but it doesn’t keep her from looking over her shoulder, jumping over unexpected sounds, carrying a concealed weapon or even preparing for the worst. He’s coming for her, but this time, she won’t let him get the jump on her, nor will she go quietly into the night.

Nickolas Ellis has seen a change in his long, lost love. Battered emotionally and physically, Megan has turned her fear into anger, spending her days at self-defense classes and researching things that’ll never allow her to let go of the past. And he feels guilty even asking her to, because he knows that heathen will return, it’s only a matter of time. And when he does, Nick will do anything to protect her, even the unthinkable, risking everything he’s fought so hard to get back.

Recommended for 17+ for mature and disturbing situations, language and sexual content.

Haven’t read Nearly Broken yet? Now’s your chance to pick up a copy on sale for just $1.99!

If you’d like to be entered for the $20 Gift Card from Amazon or the Book Depository, just enter using the rafflecopter below!

One thought on “{Cover Reveal} Nearly Mended by Devon Ashley”

#FantasyIndiesFebruary
#FantasyIndiesFebruary
Today, I am opening a path to new beginnings.
Finished my character sketch of Seshat from my WIP, Lost Souls. I love how she came out. Probably my best sketch yet.
Getting closer to finishing my character sketch of Seshat!
Trying something random. I'm giving away 50 e-copies of my short story, Dark Goddess, through BookFunnel.
Loading Comments...
%d bloggers like this: