The summer of her dreams is about to get a reality check.

They said it couldn’t be done, but geeky sophomore Lauren Carlson transformed herself into a popular girl after moving to a new school halfway across the country. Amazing what losing her braces and going out for cheerleading will do. Only trouble is, the popular crowd is wearing on Lauren’s nerves and she can’t wait to return to summer camp where she’s valued for her brain instead of her handsprings. She misses her old friends and most of all, her long time camp-only boyfriend, Seth. This year she intends to upgrade their relationship to year-round status once she’s broken up with her new, jock boyfriend, Matt. He doesn’t even begin to know the real her, a girl fascinated by the night sky who dreams of discovering new planets and galaxies.

But Matt isn’t giving her up without a fight. As he makes his case to stay together, Lauren begins to realize his feelings run deeper than she ever would have guessed. What if the guy she thought she was meant to be with forever isn’t really The One? Returning to Camp Juniper Point was supposed to ground her uprooted life, but she’s more adrift than ever. Everything feels different and soon Lauren’s friends are turning on her and both guys question what she really wants. As summer tensions escalate, Lauren wonders if she’s changed more than she thought. Will her first big discovery be herself?

***Looking forward to Camp Boyfriend July 2, if you are too, vote him up on this Goodreads list!***

J. K. Rock is the pseudonym for YA writing partners – and sisters-in-law – Joanne & Karen Rock. After years of comparing notes on their favorites books and films, often dreaming up new endings to suit them, they decided to  write their own stories. On their own, they’ve each sold solo projects outside the JK Rock name. Joanne Rock is an award winning Harlequin author with over sixty titles to her credit. Karen Rock debuts her first Harlequin Heartwarming release in September 2013 when WISH ME TOMORROW is released. Together, they look forward to their first Young Adult book in Summer 2013 when CAMP BOYFRIEND arrives in stores, the first in a three-book series. CAMP PAYBACK will be a Spring 2014 release, and CAMP FORGET-ME-NOT arrives in Summer 2014. Visit the Camp Boyfriend website at http://campboyfriend.net

Read More about the Flirt Squad Challenge, Click the Button Below: 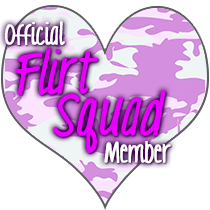 One thought on “{Book Promo} Camp Boyfriend by J.K. Rock”