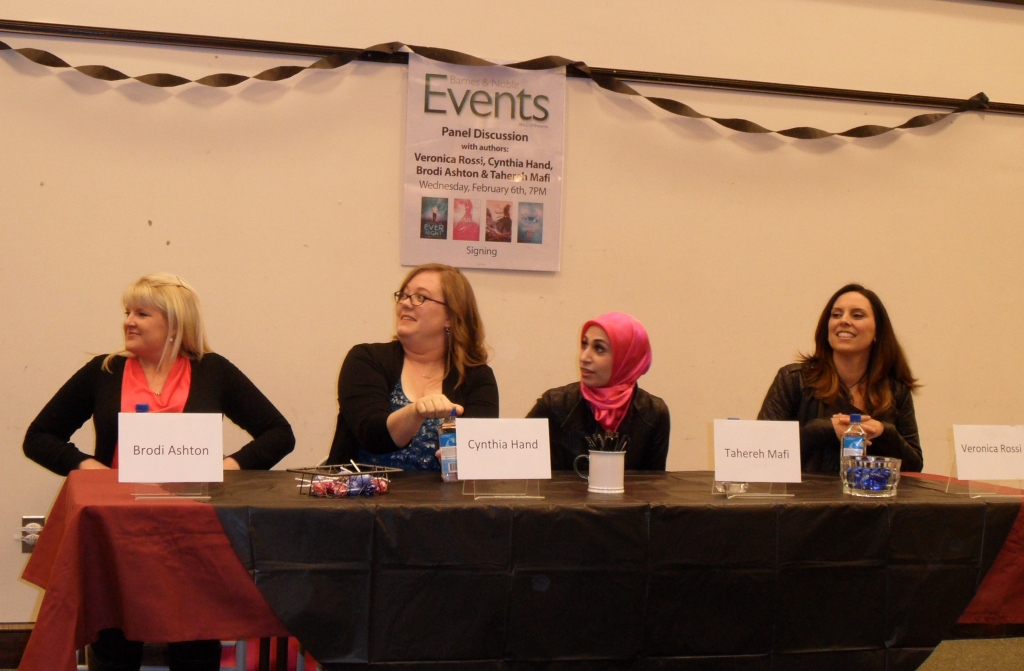 Last Wednesday, four amazing authors came to Cary, NC on the Pitch Dark Dark Days Tour: Brodi Ashton, Cynthia Hand, Tahereh Mafi, and Veronica Rossi. It was awesome! The first major YA event I attended in my own hometown. They even brought Snarkles – the Dark Days mascot.

The discussion panel was loads of fun! It started where each author had a chance to describe their series, without giving spoilers – which must have difficult beyond belief. One of my favorites was when Brodi Ashton described her main character losing something special at the end of the first novel, a “trinket with abs.” After several laughs, the authors answered several questions in relation to their novels. These questions ranged through several different topics such as describing their latest novels in five words and how they created their futuristic and fantasy settings. The authors also discussed failed manuscripts such as Tahereh Mafi’s MS about “magical purple eyelashes,” which was intriguing; their research into their novels, like Cynthia Hand visiting the actual town and high school for her setting; and the authors’ writing process and whether they were a pantser (someone who flys by the seat of their pants) or a plotter . I liked Veronica Rossi’s answer about being a plotter that boycotts.

I would have to say it was definitely the highlight of my year so far. And now I want to share a piece of it with one of you! I’m hold a Rafflecopter Giveaway featuring four signed books plus some swag. Here’s what’s up for grabs: signed copy of Everbound (Everneath #2) by Brodi Ashton plus Everbound bookmark; signed copy of Boundless (Unearthly #3) by Cynthia Hand plus three Unearthly Series bookmarks and two Unearthly temporary tattoos; signed copy of Unravel Me (Shatter Me #2) by Tahereh Mafi; and signed copy of Through the Ever Night (Under the Never Sky #2) by Veronica Rossi. One winner takes all. The giveaway is open to participants 13 years and older living in the USA and Canada. Giveaway closes midnight, February 25th. Good Luck!