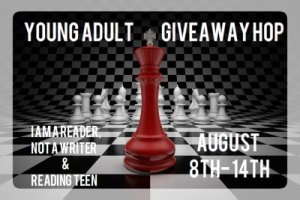 Welcome to the Young Adult Giveaway Hop, hosted by I Am a Reader, Not a Writer and Reading Teen! For the hop, I’m giving away brand new, paperback copies of Hush, Hush and Crescendo by Becca Fitzpatrick.

Goodreads Summary of Hush, Hush: For Nora Grey, romance was not part of the plan. At least, not until Patch came along. With his easy smile and probing eyes, Nora is drawn to him against her better judgment. But after a series of terrifying encounters, Nora’s not sure who to trust—she can’t decide whether she should fall into Patch’s arms or run and hide from him. And when she tries to seek some answers, she finds herself near a truth more unsettling than any feeling Patch evokes. For Nora stands amid an ancient battle between the immortal and those who have fallen—and choosing the wrong side will cost her life.

Goodreads Summary of Crescendo: Despite starting a relationship with Patch, her guardian angel (whose title is the only angelic thing about him), and surviving an attempt on her life, things are not looking good for Nora Grey. Aside from fearing her boyfriend is interested in her nemesis, Nora is haunted by images of her father and becomes obsessed with understanding his disappearance. As Nora delves into the mystery of her father’s death, she begins to wonder whether her Nephilim blood line has something to do with it. And since Patch isn’t answering her questions, Nora has to start finding the answers on her own. Relying too heavily on the fact that she has a guardian angel puts Nora at risk again and again. But can she really count on Patch—or is he hiding secrets darker than she can even imagine?

The Hush, Hush saga slipped easily into my heart as one of my favorite series of the year. And since the last book, Finale, is due to come out October 23rd, I thought it would be perfect to help one lucky winner catch up with the first two novels of the series.

This contest in open internationally to anyone 13 years or older and will close on August 15th at 12:01 AM. All you have to do is fill in your name and email in the form below (one entry per person, please). And that’s it. No following or retweeting required, but much appreciated. Also feel free to leave a comment below if you would like, I love meeting new people!

This giveaway is now closed.

Click here to follow the Young Adult Giveaway Hop and see what other great giveaways are occurring!

Morning! Not sure what to do, today. I have things on my to-do list (resume, straight up the house, author database and report), but at the same time, kind of feeling really tired. And a little anxious. Anyway, Happy Friday! Hope it's a good one.
There once were two children,⁣
Yeah, something (a decision) has been on my mind, lately. Probably overthinking, as I usually do. Need to let it go if I want to get anything else done (like #writing), which is easier said than done. Why can't the universe just put up big neon signs? 🛣️🚥🚷
Woke up feeling better than yesterday. Hoping to continue updating my resume, cleaning the house, and #writing.
Today's music: Cairo to Casablanca by Putumayo.
Litten: Are we going outside or what?
Loading Comments...
%d bloggers like this: