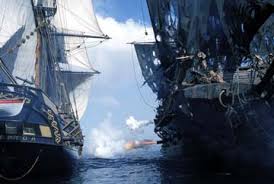 A few days ago, I finished writing my first draft of a battle scene for my next manuscript. I thought finding the right words would come easily after writing and revising Death Island. However, I guess it has been so long that I forgot how difficult the process can become.

One of the most difficult parts, hiding the results from yourself. In order to play the game well, you have to give both sides the perception that they each have the upper hand, promoting confidence that either side could win. With this confidence, the game becomes intriguing with twists and turns around every corner.

Then there is playing the game itself. What pieces to move, where to move them, when to move them, and who would be sacrificed. It’s the strategy that flows the scene in motion. You have to plan each step, the possible collisions of characters, and their reactions.

And finally, anticipating your opponent’s next move. Since you are the same person, you have to enter the minds of each team leader instead. Understand their emotions and thoughts at the moment.  Plan their strategy based on their opponent’s, yet without revealing the opponent’s battle strategy all together. One must keep secrets from the other, giving their team an upper hand in battle.

Now, knowing me, I probably over analyze every step of the game and commanding two sides of the same game can blow one’s mind. But, it’s so much fun!

2 thoughts on “Words of Battle”